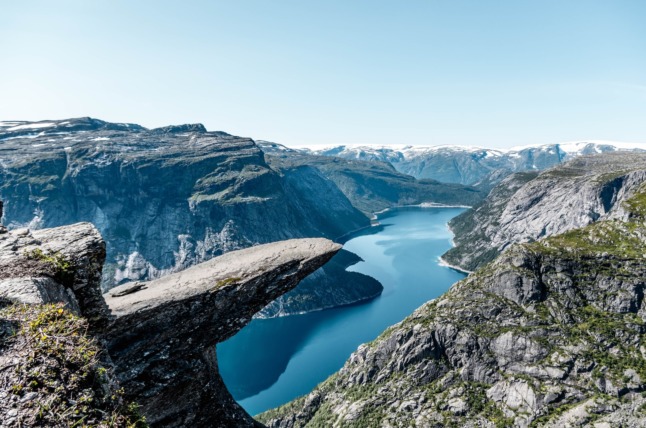 Deciding which time of year to move to Norway may be more important than you originally thought. Pictured is Trolltunga. Photo by Dong Zhang on Unsplash

Plenty of planning and preparation goes into moving to Norway. Whether it’s finding a job, a place to live or getting your paperwork in order, there’s plenty to mull over.

One thing you may not have considered is which time of year makes for the most seamless and straightforward transition to help you hit the ground running in Norway.

If you move in the summer, you may find it really hard to get your affairs in order due to fellesferie, the summer period when it feels like the whole country is on holiday, or you might struggle with the long, dark nights if you arrive in the winter.

There’s something about spring that evokes feelings of starting afresh, and for sentimental reasons, this might make it a great time to move to Norway. But how much sense does the move make in practical terms?

Firstly, if you’re a bit concerned about the potential of long nights, then the period between April and May is potentially the best time of year to move as it has the most balanced day to night ratio of all the seasons.

Additionally, weather-wise you can expect reasonably mild temperatures rather than bone-chilling cold.

Another positive is the high season for job postings takes place in January. This means that when you start your job, there’s the potential for there to be plenty of other new recruits. This can make starting the job less daunting and help socially by sharing something in common with your coworkers.

There’s also plenty of Norwegian culture and traditions to delve into, whether it’s May 17th, Constitution Day, or making the most of the backend of the cross-country ski season.

There are some downsides before you start marking dates in your calendar and begin making good on plans.

If you have kids, they’ll be starting school bang in the middle of the academic year. This could make it hard to acclimatise.

Also, the rental market in spring can be quieter, especially compared to the high season in the fall.

If you choose to move in the summer, there’ll be plenty of great opportunities to make the move a success.

Firstly, the weather will be at its warmest, presenting plenty of opportunities to explore your new surroundings, whether it’s finding a trendy spot for a utepils (a beer drank outside) or finding great places for hiking, biking and swimming.

Additionally, given the weather and long days, people may feel more sociable, making it easier to make friends and settle in.

If you are moving with children, then the summer holidays will allow them to settle in before starting at their new schools in the fall.

However, some things can make summer less than ideal. Firstly, there’s fellesferie, which is a three-week period where a lot of the country goes on vacation, can make getting essential tasks done hard work.

Also, with so many people coming and going from their vacations, it can make getting a solid start at work tricky.

The fall in Norway sees the days get shorter and the temperatures sink towards zero. However, it’s not all doom and gloom and the season offers plenty of reasons why you should consider moving at this time of year.

Firstly, autumn is the high season for the rental market in Norway. This means much more choice, and hopefully, value for money. However, there will be some drawbacks. One is the breakneck speed of the rental market in the Nordic country, meaning that trying to keep up with the market might leave your head in a bit of spin. It also means more competition in the form of prospective tenants.

READ ALSO: Eight things to know when renting an apartment in Norway

One upside about autumn, though, is that it can offer a decent opportunity to adapt to the shorter days more gradually. As the days become increasingly shorter, you will be able to get used to the longer nights, rather than, for example, moving in the winter and finding it completely overwhelming.

Don’t let the dipping temperatures put you off from getting active either, as there’ll still be plenty of hiking opportunities.

If you do start a job at this time of year, things should also be relatively settled and stable after the summer holidays. For those attending school rather than work, you’ll also be right at the beginning of the year, meaning that learning won’t be too disrupted.

The cold winter months will show Norway at its most beautiful, and it’s when the most job postings are listed. This is ideal if you don’t already have employment in Norway sorted.

The cold can put people off with the temperatures regularly below freezing, and the short days and long nights may take some getting used to.

READ ALSO: Five things you need to learn to love about winter in Norway

But if you are into winter sports or always wanted to give them a go, then you have the benefit of the whole season ahead of you.

There could be quite a lot of chop and change at your job, though, because January is the month with the most job listings. This could disrupt the adaptation process somewhat.