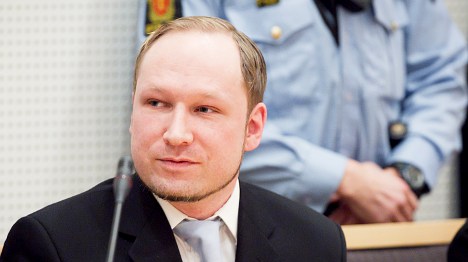 "To send a political activist to an asylum is more sadistic and more evil than killing him! It is a fate worse than death," the 33-year-old right-wing extremist wrote in a 38-page letter, of which the Verdens Gang (VG) daily published a few extracts.

The letter aims to discredit, point-by-point, a report by two psychiatric experts, Synne Sørheim and Torgeir Husby, who concluded late last year that Behring Breivik was suffering from paranoid schizophrenia and was therefore criminally insane.

If the Oslo court judges reach the same conclusion at the end of his 10-week trial, the confessed killer will be sentenced to a locked psychiatric ward, possibly for life, rather than prison.

Behring Breivik, who has claimed to be on a crusade against multi-culturalism and the "Muslim invasion" of Europe, wants to be declared of sane mind, according to his lawyers, so as not to damage the political message presented in his 1,500-page manifesto published online shortly before the July 22nd attacks.

"I must honestly admit that that is the worst thing that could happen to me since it would be the ultimate humiliation," he wrote in Wednesday's letter.

Behring Breivik claims in the letter that he found more than "200 lies" in the psychiatric report, ranging, according to VG, from small language mistakes to whole paragraphs the right-wing extremist claims Sørheim and Husby made up.

"The problem is that 80 percent of the content in the 13 conversations (the experts had with Behring Breivik and which they based their conclusion on) is completely made up," he wrote in the letter.

Reversing roles, the confessed killer questioned whether Sørheim and Husby may have been so traumatised by his attacks that they were unable to be objective and should have be considered unfit to evaluate his mental state.

"The very brutal, and for them incomprehensible, actions, combined with our incompatible ideological opinion differences resulted in a conclusion that most probably emerged as a result of out-of control emotions, where the lack of a pragmatic approach was all but complete," he wrote.

"Their aim was quite clearly to create the premises that support the diagnosis they reached early on," he wrote.

The psychiatric experts' conclusion last year caused outcry in Norway and the Oslo court has ordered a second evaluation by two new experts who are set to present their findings on April 10, less than a week before the trial gets underway.

He then went to Utøya island, some 40 kilometres north-west of Oslo, and, dressed as a police officer, spent more than an hour methodically shooting and killing another 69 people, mainly teenagers, attending a summer camp hosted by the ruling Labour Party's youth wing.

"I of course knew right from wrong, but I acted instinctively," Behring Breivik wrote in his letter.