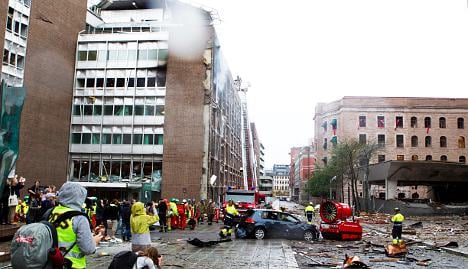 In one incident, a 21-year-old woman of Somali origin was advised to “leave the country” by schoolmates travelling on the same bus.

After getting off at the same stop, one girl pulled her braids so hard that she ripped them from her head, leaving her bruised and with a serious scalp wound, according to the report from the Norwegian Centre against Racism (NCR).

The non-governmental organization was tasked with compiling the report by a special government commission appointed to examine the events of July 22nd, when Anders Behring Breivik killed 77 people in twin attacks in Oslo and Utøya.

For its preliminary report, NCR conducted 15 in-depth interviews with immigrants who said they were harassed by people who assumed the bomb attack had been carried out by foreign terrorists.

In all, NCR has been in contact with 70 people and is planning to continue interviewing more immigrants about their experiences on the bloodiest day in Norway since World War II. The group expects to present more extensive findings later this spring.

“A lot of people have told us they’ve heard of someone who was harassed but we have restricted ourselves to first-hand sources,” said NCR head Kari Helene Partapuoli.

Several of the incidents related by respondents were of a serious nature. In addition tophysical attacks, in which they were pushed, kicked or threatened with knives, many were subjected to verbal harassment or denied access to public transport.

Despite these reports of racism and violence, Norwegian police did not receive any reports of racially motivated attacks on the day of Breivik’s killing spree, or in the days immediately afterwards.

Partapuoli said this could be partially explained by a general reluctance to talk about the incidents.

“Our informants said there was no question of them ringing the police and disrupting them that day,” she told newspaper Vårt Land.

The report also noted that many of the immigrants affected were disinclined to raise the issue at a time of such suffering for the country, when so many young people had lost their lives.

But Zakaria Saalathi, head of Ung Muslim, a group representing young Muslims in Norway, said immigrants should make sure to report all cases of harassment.

“It’s important when we see that certain media call into question whether there really was harassment when nobody reported it,” he told newspaper Dagsavisen.

Stories from the report

An Iranian asylum seeker said an ethnic Norwegian man wearing shoes with steel toecaps kicked him four times on an Oslo bus. Nobody intervened to help him.

A man of Algerian origin said three drunken men pursued him after he got off a bus on his way home from work. One pulled out a knife and threatened him several times before he was stopped by one of his comrades.

A Congolese woman in her thirties said she and a colleague of Iraqi extraction approached the bomb site to see if they could help in any way. As they walked through the streets, they heard several people call after them with comments like: “What are you doing in Norway” and “Go back to where you came from”.

A woman of Moroccan origin was wearing a hijab when the bomb struck. As she walked on Storgata, a man said to her, in English “This is Al-Qaeda” and, in Norwegian, “Are you real Al-Qaeda Muslims”.

An ethnic Norwegian Muslim said he became frightened as he rode the tram and heard a group of men in their twenties who said they were heading to the city centre to “taste some Muslim blood”. He was worried what they would do if they knew he was a Muslim.

A Somali couple in their forties returned from their holidays on the day of the explosion. Arriving at their home they met a Norwegian couple with whom they had long had a good relationship. The woman helped them with their luggage but the man exclaimed: “Why are you helping these people who want to kill us?” The woman ignored her husband and continued to help.

A 23-year-old man with Kenyan roots said he was on his way home when a man in his forties shouted at him, calling him a “fucking terrorist”. Switching on his computer at home, he found the hatred had also begun to spread on Facebook. “I deleted 30 friends that day,” he said.

Two days after the terrorist attacks, two youths began throwing stones at three teenagers with immigrant backgrounds in Lillestrøm. Amid a tirade of racist abuse, one of the young men said: “Breivik should have killed all of you instead.”