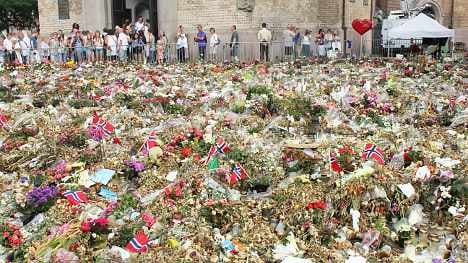 Two psychiatrists who have been examining the 32-year-old right-wing extremist since his twin attacks on July 22 concluded in the report they handed over to the Oslo district court on Tuesday that he had over time developed "paranoid schizophrenia."

Prosecutors said that if the diagnosis is confirmed by a forensic medicine board, they would ask for him to be sentenced to "compulsory mental health care," possibly for life, instead of prison.

"The experts describe a person who finds himself in his own delusional universe, where all of his thoughts and acts are governed by these illusions," prosecutor Svein Holden told reporters in Oslo.

The two experts who conducted 13 interviews over 36 hours with the right-wing extremist described in their 243-page report a person who had "grandiose illusions whereby he believes he is to determine who is to live and who is to die," Holden said.

He "committed these executions out of love for his people as he describes it," Holden said.

On July 22nd, he first set off a car bomb outside government buildings in Oslo, killing eight people.

After that, he went to the island of Utøya, some 40 kilometres northwest of Oslo, where, disguised as a police officer, he spent nearly an hour and a half methodically shooting and killing another 69 people attending a summer camp, most of them teenagers.

The killings were the deadliest attacks committed in Norway since World War II, and profoundly shocked the normally tranquil nation.

Although he has confessed to the facts, Behring Breivik has refused to plead guilty, claiming he was waging a war and that his actions were "atrocious but necessary."

The confessed killer, who previously said he was on a crusade against multi-culturalism and the "Muslim invasion" of Europe, predicted according to the psychiatric evaluation a scenario whereby his alleged organisation, "the Knights Templar, take over power in Europe and he puts himself forward tentatively as the future regent in Norway."

The populist right-wing and anti-immigration Progress Party, which once counted Behring Breivik as a member, demanded a new evaluation of the gunman.

"It is completely incomprehensible and surprising that an individual who has planned these acts in such detail and who has proven himself capable of carrying them out should be declared unaccountable," vice party chair Per Sandberg told the VG daily's online edition.

Among survivors of the island massacre, reactions varied.

"It feels good to hear that this man is crazy," Adrian Pracon, who was seriously injured on Utøya, said on microblogging site Twitter.

"It was obvious that he was not normal, but you can have serious psychological symptoms and still be (criminally) responsible," another survivor, Torunn Kanutte Husvik, told the NTB news agency.

Jarl Robert Christensen, who lost his 15-year-old daughter on the island, hailed that the psychiatric conclusions were "the worst possible" for Behring Breivik, who considers himself a great thinker.

This "pulverises his whole ideology, and I feel good about that," he told the commercial TV2 News Channel.

"But for us, no punishment will ever be enough," he added.

The psychiatric evaluation will now be examined by a committee of forensic experts before the court, which usually follows expert recommendations, makes the final call on whether Behring Breivik should be considered criminally insane.

The final conclusion will only affect sentencing and should have no impact on the criminal trial to determine his guilt, scheduled to start on April 16th, 2012 and to last about 10 weeks.

If he is declared criminally insane and sentenced to closed psychiatric care, a judge will review his sentence every three years.

If he recovers from his illness, he could theoretically be transferred to a prison if he were considered a threat to society. He could also be released if the opposite scenario were to present itself.

His release is however considered a very unlikely scenario, and several lawyers of survivors and family members of the victims have said they are confident he will remain locked up for the rest of his life.