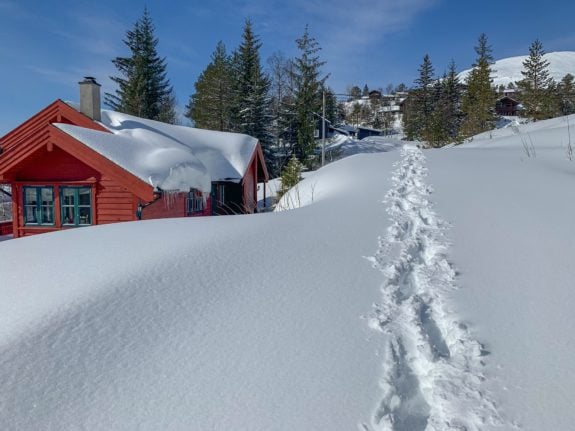 Read about interest rate hikes, a breakdown in wage settlement negotiations for the construction industry and the first Ukrainian patients arriving in Norway for treatment. Pictured is a cabin covered in snow. Photo by Rune Haugseng on Unsplash

Experts expect that the key interest rate in Norway will be raised from 0.5 percent to 0.75 percent this Thursday.

Norway’s central bank, Norges Bank, is responsible for raising the key interest rate. As many as four interest rates are expected this year.

“The starting point is that the interest rate is very low. It is much lower than the normal level for Norges Bank, which means that monetary policy is very expansionary,” Kyrre Aamdal, senior economist at DNB, told news wire NTB.

The first Ukrainian patients to arrive from neighbouring countries around Ukraine arrived in Norway on Monday.

“It is a small consolation to be able to help in this terrible situation. I am happy that the first patients are coming to Norway today, and I am confident that they will receive the best possible treatment in Norway. I send them my warmest thoughts,” Minister of Health Ingvild Kjerkol told NTB.

Last week, the government said it aimed to bring 2,500 Ukrainian refugees from Moldova to Norway. In addition, the government announced that it would also bring 550 patients requiring medical care to Norway and their close family members.

A disagreement over minimum wage and the use of piecework has led to a breakdown in talks in the wage settlement for the construction industry.

The talks between the Norwegian Construction Industry Association and Fellesforbundet will now be handled by an ombudsman (Riksmekleren).

READ ALSO: What foreign residents in Norway should know about workers’ unions

The talks between the industry organisation and trade union broke down after only two days of negotiation.

On Monday, 3,760 new Covid-19 cases were registered by the Norwegian Institute of Public Health.

1,637 fewer cases were registered on Monday than on the same day a week prior, indicating a declining infection trend.

There were 480 patients in Norwegian hospitals on Monday, ten less than the day before. 54 of those patients were in intensive care, and 20 were on ventilators.

Over the last seven days, an average of 3,706 infections have been registered per day. The same average a week before was 5,941.

More than 1.3 million have tested positive for Covid-19 in Norway.