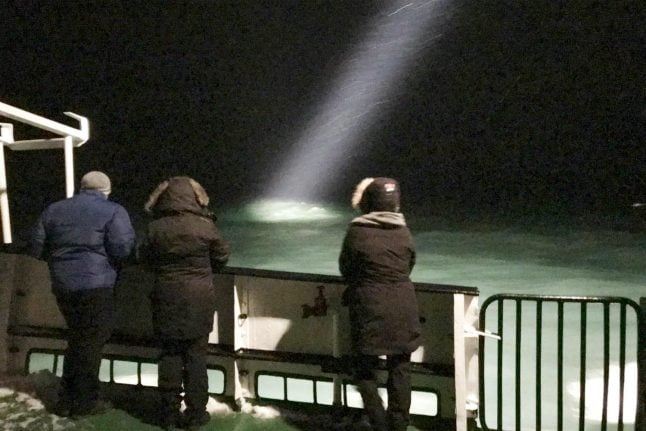 A photo taken on board the Langøysund tourist ship, which assisted in the search for the missing helicopter. Photo: Jostein Forsberg / NTB scanpix

Two Norwegian helicopters and several vessels have been searching the area since Thursday, and more help was on the way, including a coast guard vessel and a sea patrol plane, the head of the rescue operation Tore Hongset told AFP.

A small robot submarine was deployed overnight to investigate an area where an oil patch and bubbles were observed, but “it hasn't yielded any results yet,” Hongset said.

The aircraft, a Russian Mil Mi-8, went down in the afternoon two or three kilometres from Barentsburg, a Russian mining community in the archipelago.

Its eight occupants, five crew and three scientists, were all Russian nationals.

“But we're continuing. This morning, we're maintaining our search for possible survivors, who could be on a floating object such as a survival raft.”

Rescuers were in a “race against the clock,” Hongset told Norwegian television TV2 on Thursday night.

“Time is passing and the risk of death by hypothermia is increasing exponentially,” he said.

“Until we really know what happened, the search continues as if there is a chance of finding these people alive,” he added.

No contact had been made with the chopper before it went down or immediately after it was reported down.

On Thursday night, only two oil patches were detected in the area, but it is not known if they came from the Russian helicopter, another rescue service official told AFP.

“We're continuing the search until we've cleared this up,” he said.

According to Hongset the early indications, including the oil patches, suggest that the aircraft crashed into the sea.

A sonar detection also found an object lying on the seabed, but this had not been identified, he added.

The water is 200 metres deep in the area and a robot submarine would be needed to investigate the sonar finding.

Visibility in the area was reduced because of snow and darkness, which falls early this time of year at this latitude.

The aircraft was was reported missing by airport authorities around 3:35 pm on Thurdsday as it was returning from Pyramiden, another former mining community that is now a tourist site.

It was confirmed to have come down about 10 minutes later, rescue services said.

Russia's consul general in Svalbard, Viacheslav Nikolayev, told the Interfax news agency there were five crew members and three scientists on board.

“It's a civilian helicopter that belongs to the Arktikugol company and it flies the miners between (Svalbard's main town of) Longyearbyen and Barentsburg. It's a regular flight,” he said.

“We know the helicopter failed to return. But whether it crashed or not, I can't say,” he said.

Norway was afforded sovereignty of Svalbard, located around 1,000 kilometres from the North Pole, under the 1920 Treaty of Paris.

As a result, Russia operates a coal mine in Barentsburg, a community home to several hundred Russian and Ukrainian miners.

In 2008, another Mil Mi-8 crashed near Barentsburg, killing three of its nine occupants. Yet another crash near Pyramiden of the same type of helicopter left two dead in 1991.