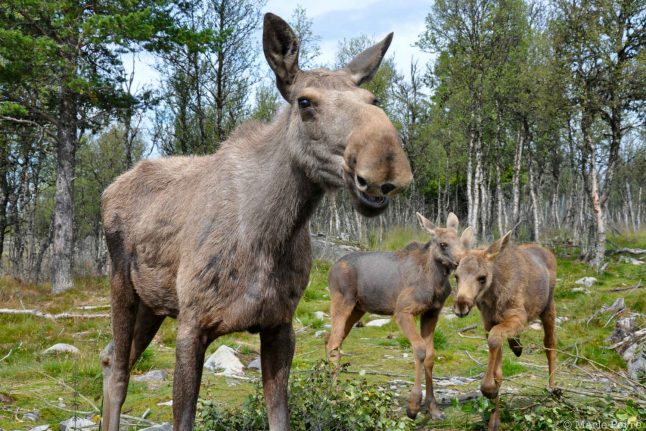 Photo: Marie Peyre
The first sight that greeted us when we arrived at Langedrag were the rabbits. Hundreds of them. Running freely everywhere. We had to watch out not to step on one of the little ones by mistake. Was it possible to have so many in one place? Later, after greeting some of the farm animals in the pen just behind the reception building, we also spotted a peacock walking on the grass roof of the dining room. As we were about to find out, at Langedrag you get really close to the animals. And this near contact makes all the difference.

Photo: Marie Peyre
Meeting Emma and co
There are some 300 residents here – over 20 species in total. Typical Nordic animals like moose, reindeer, musk ox and even Norway's own horse, the fjording, as well as endangered species like wolves, lynx and Arctic foxes. There are ancient breeds such as mouflons (the ancestors of today's sheep) and plenty of farm animals, from ducks and geese to Scottish and Telemark cows. And of course Emma, Langedrag's own celebrity, a sow weighing over 350kg. Ever heard of a pig that had its own facebook page? Well Emma does!

We spent our first day walking around the park, and joining in the feeding of the animals. That in itself was an experience, as at Langedrag you get to enter many of the pens during your visit – and feed the animals yourself, under the watchful eye of the staff. We gave carrots to the moose, lichen to the reindeer and vegetables to the wild boars – all along learning about their behaviour and diet. We even got to greet a few Arctic foxes.

In with the wolves
We watched in disbelief first, then awe, as Tuva Thorson, the owner and manager at Langedrag, stepped into an enclosure with some 'socialised' wolves to show us how she learnt to communicate with these feared predators, and get respect from them. Talking to them. Playing with them. Holding two chunks of red meat in her hands and demanding that they wait for her signal to eat. Even getting them to howl for us. We had never witnessed anything like it. Beyond the show(wo)manship lie years of close daily work with wolves, during which Thorson has gained an ingrained understanding of their behaviour – and earned their trust.

Fascinating. Yet there was more excitement in store as we found ourselves, a few minutes later, venturing in single file behind our guide into another enclosure – one that was home to wild wolves this time. As we sat in a circle in the middle, hidden from sight and surrounded by growing weeds, whispering so as not to scare them, three wolves slowly came to take a peek, here one minute, gone the next, reappearing a few metres behind us, first to the left, then to the right, moving swiftly and almost inaudibly from one spot to the next.
Ever cautious, yet curious – attracted by the treats our guide threw them at regular intervals. They came so close you could almost touch them. Could look right into their eyes. See their fur heaving as they breathed. Time stood still. We felt privileged to meet these amazing animals, if only for a little while. A truly unique encounter we won't forget in a hurry – and yet, only one of many special moments we experienced at Langedrag.

Photo: Marie Peyre
The mountain farm
Later there was storytelling in front of the fire, dinner eaten around a communal table, and a return after-hours visit to the moose pen to wish the king of the forest (and his family) good night. The next day we packed some supplies and headed to the summer pastures accompanied by dozens of goats, a mare and her foal, and spent the afternoon up at the mountain farm. We learnt how to make fresh goat cheese, sampled 'melkelapper' (small pancakes) while drinking freshly harvested juniper tea, and heard about the Huldra, the forest spirit associated with shepherds in Scandinavian folk tales. More memories to cherish.

Photo: Marie Peyre
Morning friends
Visitors staying the night can take part in the morning activities on the farm, either joining in the milking of the goats or feeding the sled dogs. We did both. Most challenging was milking the goats, fidgeting first as we struggled to hold our goat's teat correctly before our neighbour, a 12-year old girl who had visited on a previous occasion and had become a bit of an expert at this, offered to help and showed us how to do it right.

Kids love it here, as you can imagine, but so do adults. Several times I caught big, tall Norwegian guys in deep conversation with animals. There is a lot of patting and cooing going on too. My partner had to wash his fleece after coming back home as it gave off such a musky scent – a reminder of an extensive bit of cuddling with a particularly smelly buck. You don't have to be an animal lover to fall for this place. Langedrag will reveal the animal lover in you, if you were not one to start with.

Photo: Marie Peyre
Back to nature
We asked Tuva Thorson, who has been around animals all her life, what it is she thinks we learn from them – and from coming into close contact with them. 'Apart from the sheer joy it gives us, it's about knowing the power of being a part of nature', she said. 'Interacting with animals gives us a deeper understanding of nature, and I think answers a kind of longing for 'home', back to primal nature, we all carry in us. It inspires both wonder and humility.'

Whatever it is, Langedrag doesn't leave you unmoved. It's a place that touches both the heart and the soul, and one one longs to return to. We are already planning our next trip there.


Photo: Marie Peyre
Practical information
Getting there: You'll need a car. Langedrag is located between Numedal and Hallingdal in Buskerud, within easy reach of both Nesbyen and Geilo.
What do do: Activities on offer are many, and vary with the seasons. They include horse riding, dog sledging, visit to the wolves and lynx, a day at the summer farm (summer only) and more. Check the website for more info and prices.

Tip: Stay for a couple of nights to enjoy the park after-hours, and take part in extra activities like storytelling or the milking of the goats in the morning.