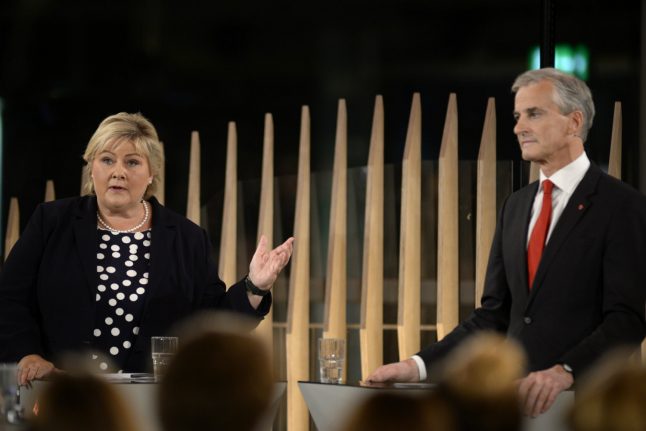 The strong exchange between the pair came as they discussed the role of populist coalition partner the Progress Party and immigration minister Sylvi Listhaug.

Listhaug has recently been criticised for misrepresenting Sweden’s internal security as part of her election campaign, and has in the past used Sweden as a cautionary tale while calling for tighter immigration policies in Norway.

On Tuesday, Sweden’s Migration Minister Heléne Fritzon cancelled a meeting with her Norwegian counterpart at the last minute after judging that Listhaug’s visit to Sweden was part of her campaign.

During Tuesday’s NRK debate, Støre appeared to be keen to challenge Solberg on the strength of her leadership over Listhaug.

The tactic appears a new direction for Støre who has not directly attacked the Progress Party or Listhaug during the campaign.

Recent polls have shown support for the Labour Party to be slipping, leaving the outcome of the September 11th election on a knife edge.

Støre’s offensive during the head-to-head debate between the two candidates for prime minister was directed towards Solberg, not Listhaug.

“Erna Solberg is one of the few, maybe the only, conservative leader that has brought a party from the far right into government. That has affected the tone in our society. They sew division and set people against each other. This has changed Norway, and it has change the Conservatives,” Støre said during the debate.

“Erna Solberg is the team leader. She comes out after Sylvi Listhaug has said something and says ‘I wouldn’t have expressed it that way’. But Erna Solberg’s legacy will be that she let this be the voice of the Norwegian government,” he continued.

In an interview with newspaper VG, Listhaug claimed that “parallel societies have developed in more than 60 places in Sweden”, calling them “no-go zones” and insisting that there are “conditions of lawlessness and criminals in control” in places with “a large quantity of people with immigrant backgrounds”.

Fritzon told VG those claims were “complete nonsense,” while Solberg said that Listhaug “must make sure that what she says is in accordance with how local authorities have evaluated the situation”.

“Jonas is saying that Norwegian society has got colder. He is judging the Norwegian people, saying they have become more hateful. There is no empirical evidence for that,” she said during the NRK debate.

“Fewer people now say that they would be concerned if their son or daughter chose to marry an immigrant. We are rehousing more [immigrants]. We have become a warmer society. You must stop calling the Norwegian people hateful for your own political gain,” Solberg said.