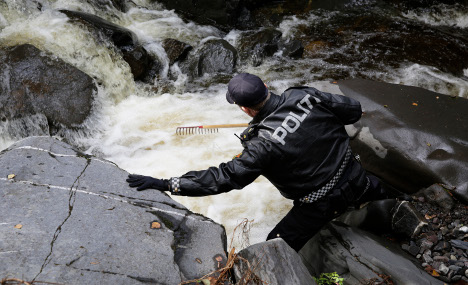 The male –  a friend of the murder victim's stepson – is charged with participating in the murder of the 58-year-old Norwegian. The main suspect of the murder, Kim Andreas Kristiansen, is still wanted by police and roaming free.

On Wednesday the police continued their man-hunt to catch Kim Andreas Kristiansen. They searched with dogs a river and a waterfall nearby a road leading up to Hafjell mountain, close to where the dead body was found.

Police chief Olav Sørby said in a press statement: “Yesterday we arrested a person suspected of participating in the murder of Bjarte Hansen in Øyer. We have questioned the charged man and he has been appointed a defence lawyer.”
Police arrested a man who is in his twenties. He is charged for both perverting the course of justice and for participating in the murder. He will be sentenced on Thursday.
Appointed defence lawyer of the arrested man, Lorentz Stavrum, said: “I can only agree with what the police have already said, but we have questioned him and will question him further before he is sentenced.”
The arrested man is charged with driving the dead body of Bjarte Hansen to the site where the charred corpse was found on a campfire on Thursday last week.
The main murder suspect, Kim Andreas Kristiansen, does not own a driver's license and police claimed from the beginning of their investigation more than one person was involved in the case. Police have not commented if they have found the vehicle connected to the case.
Police chief Olav Sørby said to VG: “What has happened today is a significant step further. [The man] was arrested due to forensic evidence. What is going to happen now is questioning the man, and this will make the basis for a charge and imprisonment.”
Bus driver Olav Angard is one of the last witnesses who informed police he saw Kim Andreas Kristiansen. On Thursday afternoon the 23-year-old travelled on his bus in Øyer, one hour and 45 minutes after the police was notified a body was found in a nearby forest. Kristiansen got on the bus near the campfire where his dead stepfather was found.
Angard said to NRK: “[Andreas Kristiansen] got on the bus in Øyer at 1.45pm and went off at Lillehammer taxi station at 2.05pm.”
According to the bus driver, who knew Kristiansen as a passenger on several occasions before, the 23-year-old appeared anxious. Since Friday, police dhave no evidence that the wanted man is alive, but they also have no reason to believe he is dead.