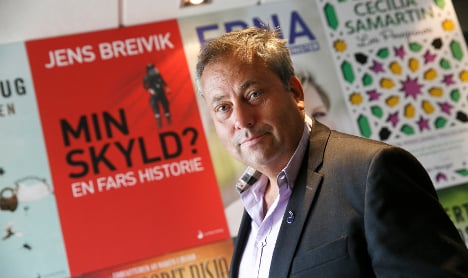 At a press conference in Oslo on Wednesday, Jens told the media his book “Min skyld?” (“My fault?”) reflects on his responsibility for the worst terror attack in Norway's history.

“Absent” … “cold” … “tyrannical”. Those were some of the words used to describe Jens Breivik after his son killed 77 people on Utøya and outside the government headquarters on the 22nd July 2011. Many have pointed at the father’s absence throughout his son’s childhood as a key factor to understanding Anders Behring Breivik.
The book will be released in Norway in October and published by Juritzen Forlag.
Publisher Arve Juritzen said to NTB: “The book is an attempt by Jens Breivik to understand what happened to his son. Jens has become a scapegoat and needs to reflect upon whether what happened was his fault.”
Juritzen adds the book does not defend Jens Breivik, rather it "is an attack on himself and his own efforts as a father."
Juritzen described Jens as a warm grandfather figure and a silent and reflective man. He is also a stricken man and one who has got his share of beatings.
“The terror attack affected Jens's life seriously. It is not wrong to say that his life is now shattered. He has become the symbol on the one who failed. A bad father.”

Jens Breivik now lives in France and has visited his homeland Norway only once since the terror attack of 2011.

The author had sent drafts of his book over the years, but no Norwegian publisher wanted to publish.
Juritzen said: “The original script was something that we didn't wish to publish, but we had a meeting with Jens Breivik and believed there were grounds for publishing a completely different kind of book.”
A ghostwriter has worked with Jens Breivik over one and a half years and the book will be finished before October.
It is unknown whether Anders Behring Breivik knows his father is writing a book, and says Anders will not read the script before the book is published.
Last autumn, Marit Christensen’s book “Moren” (“The Mother”), portraying the mass murderer’s mother Wenche Behring Breivik, received harsh criticisms and Christensen was accused of several factual and ethical errors.
It is not decided yet if Jens Breivik will be present at the launch in October.