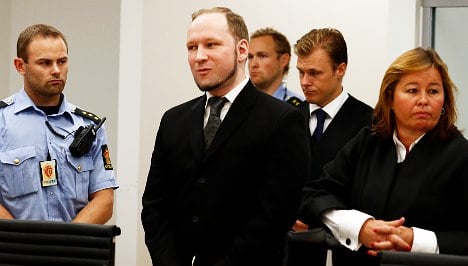 4.17pm: Thanks for tuning in to the live blog today. We'll round things off with some answers to a question on many people's lips in recent months: Why is Norway's maximum sentence just 21 years?

Make sure to check back into the site for more news later. For instance, reports are now beginning to emerge suggesting that the prosecution will not lodge an appeal.

3.02pm: Survivor Frida Holm Skoglund: "I'm going to fully live the first day of the rest of my life."

The mood in Norway is very much one of relief today that the man who caused so much suffering will now be held accountable for his actions. Here are some more voices from Twitter and beyond.

2.52pm: We've got a new article up on the site now on Breivik's reaction as the court gave its verdicts and described in detail the horror of his twin attacks.

1.40pm: Lunch time here at The Local. We'll be back soon with more updates from Oslo.

1.21pm: Linda Sogn, whose 17-year-old daughter Isabel was killed by Breivik, said she hoped prosecutors would decide today on whether or not to appeal.

"I'd like to see that decision made today. I'd find it painful to have to spend 14 days wondering if somebody is going to change something now."

1.15pm: John Hestnes, who represents a support group for survivors and victims' families, echoed the reactions of many in Norway today in welcoming the court's decision.

"This man is a danger to society. Now I'm quite sure we'll never see him again," he said.

12.45pm: Here's a timeline of all the main developments in the case since last July.

12.36pm: Like many others who escaped the carnage, Swedish Utøya survivor Ali Esbati says the verdict came as a relief.

“It’s nice that there was no judicial doubt that Breivik was responsible. It has been so clear throughout that he knew what he did, and that he stood by it,” he told the TT news agency.

The Local Sweden has the story.

12.19pm: The Guardian is running a moving video featuring interviews with the family of 18-year-old Bano Rashid, a Kurdish Muslim immigrant from Iraq who was among Breivik's 69 victims on Utøya.

12.08pm: We have lots more updates on our top story, including this tweet from Utøya survivor Ingrid Nymoen: "This crap is finally over. Life can start now."

11.43am: Anders Behring Breivik has taken the verdict in his stride, according to one of his lawyers who spoke to the far-right extremist during the first recess.

"He said the verdict was no surprise," Odd Ivar Grøn told newspaper VG.

11.35am: The sheer horror of July 22nd 2011 was brought back to all those in attendance in the courtroom on Friday as judge Arne Lyng began reading out the names of the 77 victims, along with descriptions of what they were doing at the time, and how they died. The sense of shock and sorrow was so palpable that the court called for a break midway through.

11.25am: Tore Sinding Bekkedal was one of the people who survived the Utøya massacre last July. He said he was pleased with the verdict.

"Things like this have happened before in history – people didn't blame it on psychiatry then," he told news agency NTB.

He added that he hoped there wouldn't be an appeal.

"Now we can try to move on. All the same, the people who were killed out on the island are never coming back, and that's what I find hardest to think about."

11.19am: As the court paused for a short recess at 11am, prosecutors Svein Holden and Inga Bejer Engh were tight-lipped on how they planned to proceed. Holden wouldn't say if the prosecutors intended to reach a decision on Friday or if they would take some time to think the verdict over.

"We're keen to hear how the court has reasoned," he said.

11.14am: Law professor Erling Johannes Husabø from the University of Bergen told news agency NTB that the prosecution would listen to the court's reasoning before deciding whether to appeal. The prosecution wanted Breivik deemed insane.

"The prosecution will look at the legal basis [for the sanity verdict] and decide if it's an acceptable interpretation of giving the defendant the benefit of the doubt.

10:57am: We've just got some reactions in via news agency AFP, including this comment from one survivor: "YEEEEEEESSSSSSSS!!!"

10.46am: The court has found no evidence that the Knights Templar organization exists. Breivik said he attended the formative meeting of the would-be terrorist network in London in 2002. The court found that he did indeed visit London in early 2002, but, says judge Arntzen:

"The police investigation indicates that the network most likely does not exist, and the question is whether the defendant's account of the Knights Templar may be a result of delusions."

She said the court would return to this later when it discusses Breivik's sanity.

10.36am: Breivik’s relationship with other players in the online role-playing game World of Warcraft was central to the court’s decision, judge Arntzen said.

One witness who played on the same team as Breivik said the right-wing extremist was a good team leader who was very active.

The witness often played WoW 2 six days a week for up to 16 hours a day. Breivik, he said, was equally active.

10.28am: The court expects to spend six hours reading out the 90-page verdict, including lunch and other short breaks.

10.21am: Anders Behring Breivik smiled in apparent satisfaction as judge Wenche Elizabeth Arntzen announced that the court had found him sane and he can be sentenced to prison. Breivik didn't want to be deemed insane, since he thinks that would have undermined his war on multiculturalism.