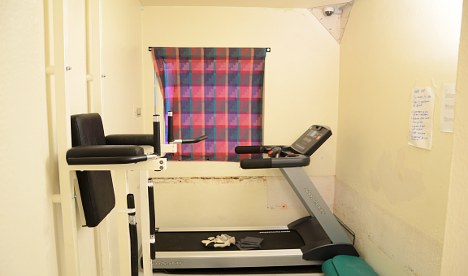 Ila prison has distributed this picture of a cell where Anders Behring Breivik works out on a treadmill (Photo: Ila fengsel og forvaringsanstalt/Glefs AS)

The 33-year-old right-wing extremist has confessed to last year's twin attacks that left 77 people dead, but faced with contradictory expert opinions the five district court judges must decide if he is sane and goes to jail or insane and to a mental asylum.

Either way, he will be calling the top-security Ila prison just outside Oslo home.

In order to accommodate the perpetrator of Norway's deadliest attacks since World War II, Ila is planning to build a new wing to serve as a small hospital if Breivik is ordered to undergo psychiatric care.

Alternatively, if he is ordered behind bars, Breivik could find himself in similar quarters at Ila to the ones he has occupied since his arrest, where he would at least initially be kept apart from the other inmates.

He currently has access to three relatively dingy and bare cells, each measuring eight square metres. One is for sleeping, one is for physical exercise with workout machines, and one is a workspace that has a laptop nailed to a desk.

The computer is not connected to the internet, to prevent communication with the outside world, but according to tabloid Verdens Gang (VG) it does feature an offline version of the encyclopedia Wikipedia.

"It's like an upgraded typewriter," a prison administration official, Ellen Bjercke, told AFP.

It is not yet known if Breivik, who says he wants to write books, will be allowed to keep the computer after Friday's verdict, she added.

In May, VG sparked public consternation when it claimed that Ila management planned to pay people to keep Breivik company, for example to play chess with him, in order to break his total isolation since that could be criticised by the European Court of Human Rights in Strasbourg.

"The idea is to increase contacts with the prison staff who are tasked with keeping him active, doing physical exercise with him, talking to him," she said.

If Breivik is ordered to undergo psychiatric treatment — an outcome he has opposed because he does not want his nationalist and Islamophobic ideology to be considered crazy rantings — he will be admitted to the small hospital that Ila is planning to build by late 2013.

Security at existing psychiatric hospitals has been deemed insufficient to house a criminal of his calibre.

While he would be physically located in a prison, Breivik would be surrounded by specially-trained hospital staff and would receive medical care, albeit under top-level security.

Following the attacks, Norway urgently adopted amendments to its legislation — dubbed "lex Breivik" by the media — which make it easier to search patients and strictly monitor their contacts with the outside world.