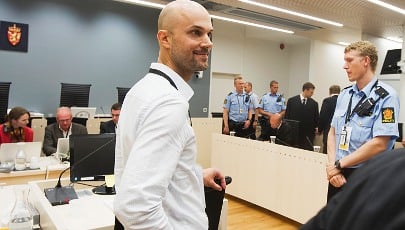 Johannesen was called by Breivik's defence to back its case that he was not crazy when he killed 77 people in Norway last year.

While Breivik's guilt is not in doubt, his sanity is at the heart of the ongoing trial in Oslo, where he stands charged with committing acts of terrorism in his twin attacks in and near the capital.

He bombed a government building in Oslo, killing eight people, then shot dead another 69, mainly teens, who were attending a summer camp held by the ruling Labour Party's youth wing on the island of Utøya.

He says his actions were to stop Norway falling victim to multiculturalism and a "Muslim invasion," and wants to be officially declared sane in a bid to ensure that his ideology is not written off as the ravings of a lunatic.

Johannesen told the court he was "completely convinced" that Breivik was not psychotic, attributing his radical views to political extremism and not mental illness.

"In light of his ideology, I don't think that he can be treated with therapy or with medicine," Johannesen said.

The first conducted last year found him to be suffering from "paranoid schizophrenia" and therefore not responsible for his actions, while the second carried out shortly before his trial began in April concluded that he was sane enough.

The opinions voiced on Monday by expert witnesses called by the defence confirmed that they were still at odds, with psychiatric professor Einar Kringlen reversing his opinions.

Kringlen said he no longer felt that Breivik was insane but instead favoured the second evaluation.

"Evil cannot always be explained by illness," he said, pointing to the Holocaust as an example.

The five judges will rule on the question when they hand down their verdict either on July 20th or August 24th.