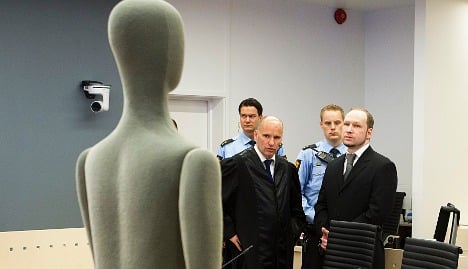 On the 12th day of the right-wing extremist's trial, the Oslo district court heard a clinical explanation of how the first nine victims died before being given more intimate descriptions, illustrated with photographs of the same people when they were alive.

Most of the 69 people killed on the small, heart-shaped island near Oslo on July 22nd were teens attending a summer camp hosted by the ruling Labour Party.

The lawyers representing survivors and victims' family members visibly fought back tears as they sketched brief but moving pictures of the dead based on testimony gathered from their loved ones.

The first person Breivik shot, camp guard and off-duty police officer Trond Berntsen, was thus described as "the best dad in the world," as a picture of him holding his two young children was projected on a screen in the courtroom.

And Lejla Selaci "was a girl who spread laughter and joy. She was known for always fighting for justice, solidarity and democracy," another lawyer told the court with a trembling voice, referring to a bubbly girl shot dead at just 17.

The descriptions provoked an anguished yet dignified display of emotions from many of the relatives, including children and younger siblings, seated in the courtroom: some broke down in tears, some embraced and others left the room.

Sitting just a few metres from Breivik, a teenager listened with a blank face to the description of how the killer had deprived her and her three siblings of their mother.

Breivik himself however showed no emotion, as has largely been the case since his trial began on April 16th.

The 33-year-old confessed killer remained stony-faced and aloof as he looked through a folder in front of him with pictures of the dead as they were found on Utøya, and again as he watched the coroner show on a life-size doll how bullets penetrated each body.

As he has since the beginning of the trial, he appeared to be taking notes under the scrutinising gaze of four psychiatric experts appointed by the court to review his mental state.

Breivik "was probably the only one who didn't have goose bumps or was crying," young Utøya survivor Sondre Lindhagen Nilssen told the Aftenposten daily's online edition.

The list of Breivik's victims on Utøya is so long that it is expected to take all of next week to go through all the post-mortem reports.

Of the 69 people who died on the island, 67 were shot to death, while the remaining two died from a fall and drowning, Torleiv Ole Rognum of the Norwegian Institute of Public Health told the court.

Most were hit by two or three bullets — up to eight had been pulled from one body — and a full 56 of the victims had been shot in the head, Rognum said, revealing how Breivik had systematically executed his victims.

As he strode around the island shooting for more than an hour, Breivik had among other things used fragmentation bullets typically used when hunting large game.

"They create thousands of small fragments that you cannot see with the naked eye," Rognum explained.

Before he went on his rampage on Utøya, Breivik had bombed the government building housing the offices of Labour Prime Minister Jens Stoltenberg, who was not harmed in the attack that killed eight people.

While Breivik, who has been charged with committing "acts of terror," has confessed to carrying out the twin attacks, he refuses to plead guilty, insisting they were "cruel but necessary" to stop the Labour Party's "multicultural experiment" and the "Muslim invasion" of Norway and Europe.

Although he is certain to be found guilty, his 10-week trial should determine the question of his sanity.

If he is found criminally insane however, he will be sent to a closed psychiatric care unit for treatment.

That is a fate Breivik, who is intent upon showing that his anti-Islam ideology is not the ravings of a lunatic, has described as "worse than death".

Five judges will decide whether he should be considered sane or not when they hand down their verdict in mid-July.