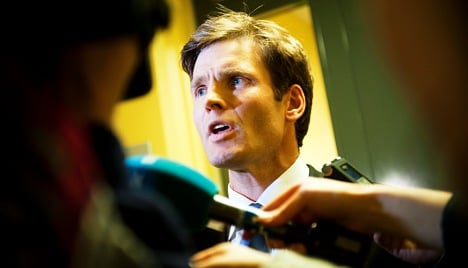 "The request for judicial assistance has been sent to France in proper fashion and passed to the Paris prosecutor's office to be carried out," justice ministry spokesman Bruno Badre told AFP.

On July 22nd last year, Behring Breivik set off a bomb outside a government office in Norway then drove to an island in a fjord outside the city and opened fire on teenagers staying at a youth camp.

In all, the twin attacks left 77 people dead, the worst bloodshed in Norway since World War II. Behring Breivik had a history of online political extremism and has boasted that he was at war with Muslim immigration.

"He does not want to come to Norway, nor to go to the Norwegian embassy or consulate where we could interrogate him, and we have therefore asked French authorities to help," Norwegian prosecutor Pål-Fredrik Hjort Kraby said.

"The father has not seen the suspect for years," he told AFP on Tuesday, explaining that he wanted Norwegian investigators to sit in as French police question Jens Breivik before the trial, which is due to start in April.

"He has not lived with him since he was one year old, and he is therefore peripheral but still important for understanding his personality."