Artificial Intelligence programmes such as ChatGPT have made headlines worldwide for writing scarily accurate essays, poems, and even newspaper articles. We decided to ask ChatGPT to tell us some jokes about Norwegian things, and here's what happened.

How does this work?

We're using ChatGPT, an open-source AI model designed for dialogue. Essentially, you type in a question, and it generates a response. After testing its article-writing skills (which in some cases were pretty good, in others… not so much), we decided to test how good it was at telling jokes.

First off, I asked the AI to "tell me a joke about Oslo".

This really didn't go to plan, as you can see by the first attempt. I still don't quite understand whether this is an actual joke with a working punchline (answers on a postcard).

As you can tell, the AI couldn't quite crack jokes about Oslo. Screenshot: The Local

I decided this chat was a lost cause and gave the AI another chance at an Oslo joke. Unfortunately, these efforts weren't much better. At this point, I imagine the AI adjusting its tie a la Rodney Dangerfield. 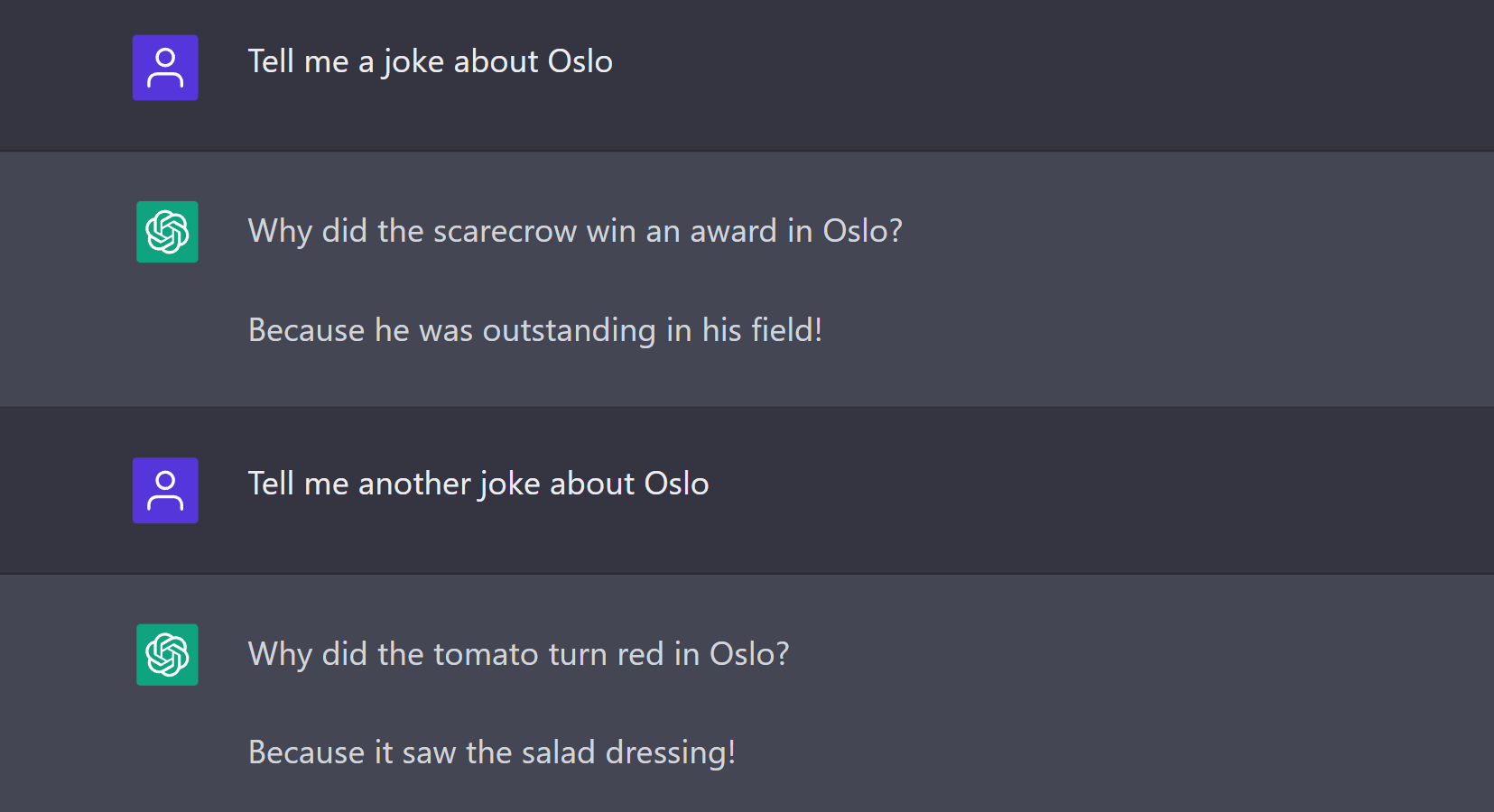 I did inform the AI that its follow-ups weren't entirely Oslo-specific. When I asked for something more relevant, the AI's attempt didn't make much sense. Once I told it, it decided to turn on the audience- assuming I wasn't intelligent enough to understand the joke (a real possibility).

Based on the passive aggressiveness of the responses from the programme, I imagine I'm top of the hit list when the machines choose to rise up. 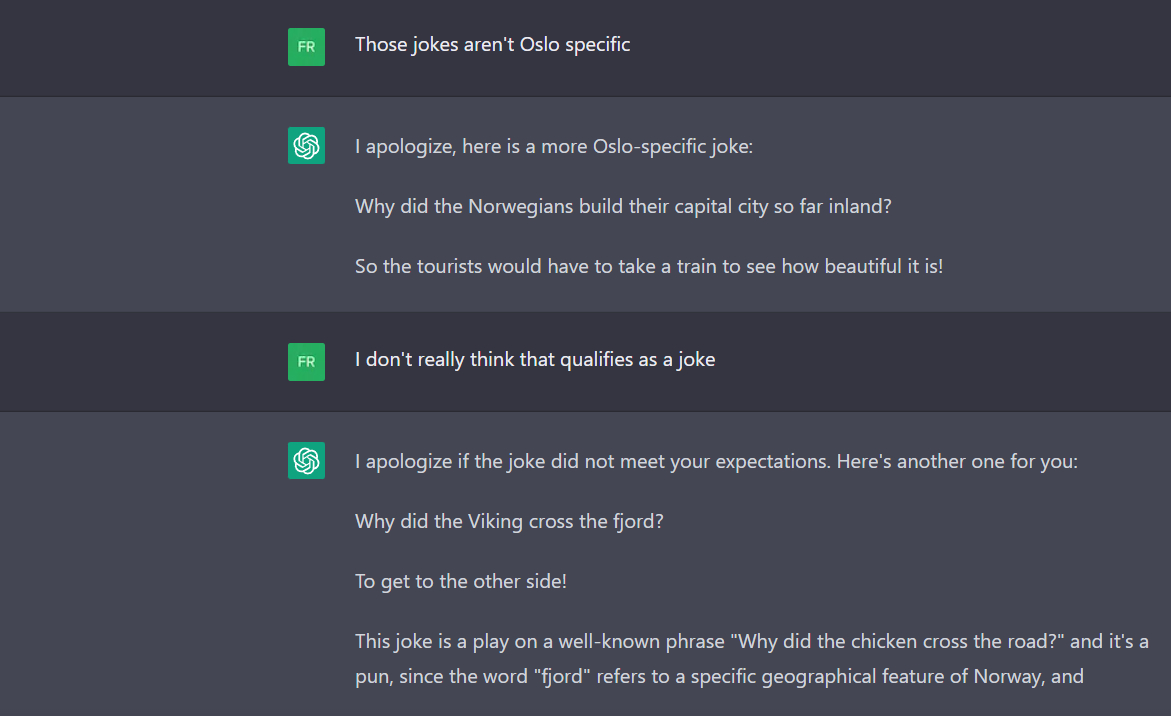 Having the AI over-explain the joke felt pretty humiliating. Screenshot: The Local

When I asked for a more Norway-specific joke, the AI did deliver an actual joke with a working punchline. However, I had heard the Scandinavian punchline countless times before, meaning the AI had pinched it from someone else's routine (What a hack!). 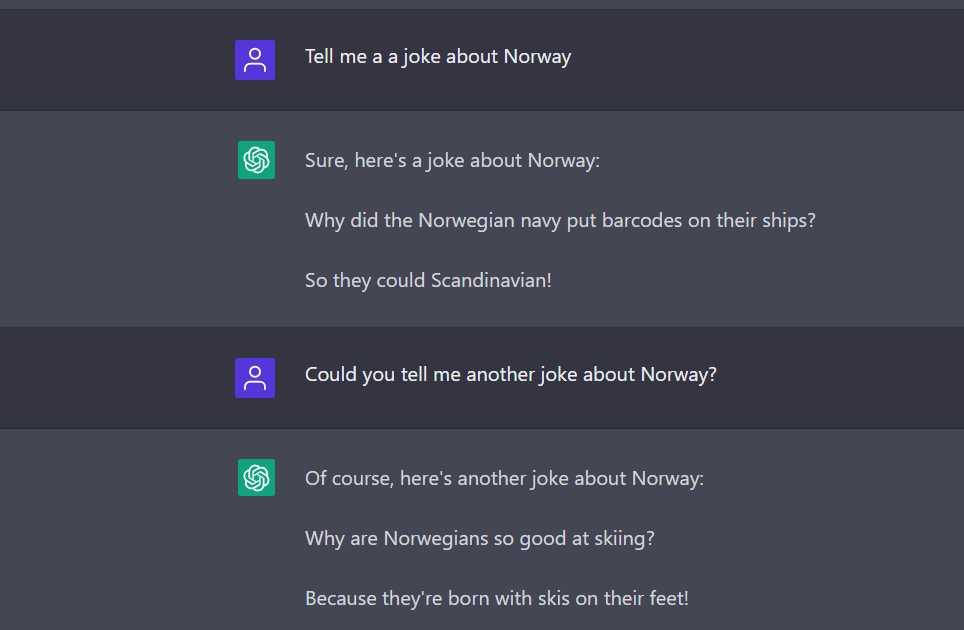 The following joke about Norway didn't quite hit the mark. Although to be fair to the AI, it is a very common saying that Norwegians are born with skis on their feet, such is their infinity for anything involving two planks of wood and poles.

Despite not being a joke, I found myself a little charmed by this attempt from the AI. Encouraged by the last couple of tries, I decided to up the ante and ask the AI to generate a scene from a Norwegian sitcom. 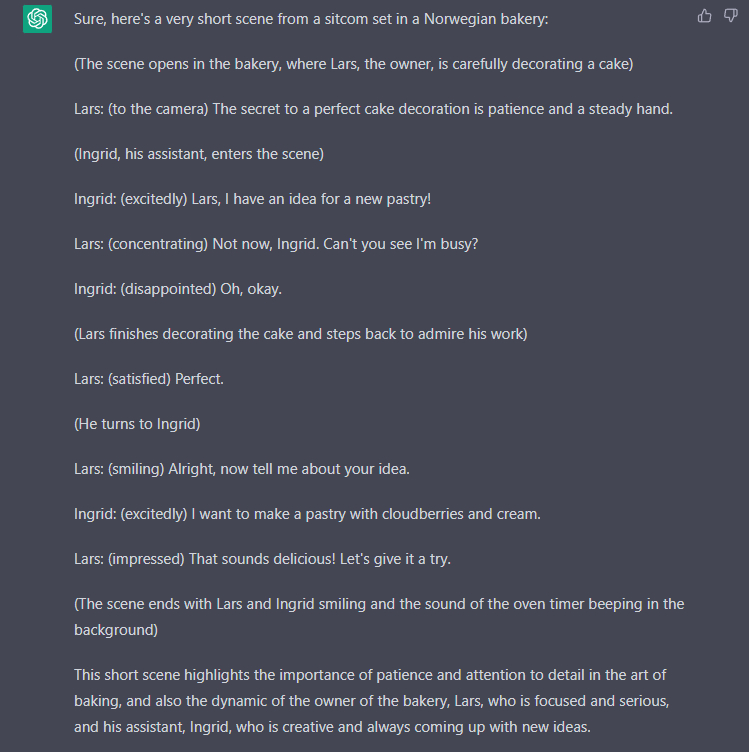 Worse sitcom scenes have certainly been written. Screenshot: The Local

While not laugh out loud, the scene sounds like it could be lifted from an easy-watching show suitable for the whole family.

A few things impressed me about the scene, first is the use of cloudberries and cream (although it made me equally anxious about what a Norwegian bakery would charge for goods made with cloudberries).

Secondly was the character development outlined by the AI, which you can see below. Perhaps the AI is more comfortable in the writer's room than it is delivering one-liners.

Impressed with the AI's understanding of Norwegian culture, I decided to go back and ask it to tell me another joke.

Once again, these jokes didn't feel like attempts at humour but instead AI using logical thinking as a punchline. However, this time the AI took my constructive feedback better than the last time I tried to explain the wisecracks weren't quite working.

The AI's humble response to the feedback stopped me in my tracks, so I decided to play to its strengths instead and get it back to writing. I wondered whether it had much to give the world as a political satirist. 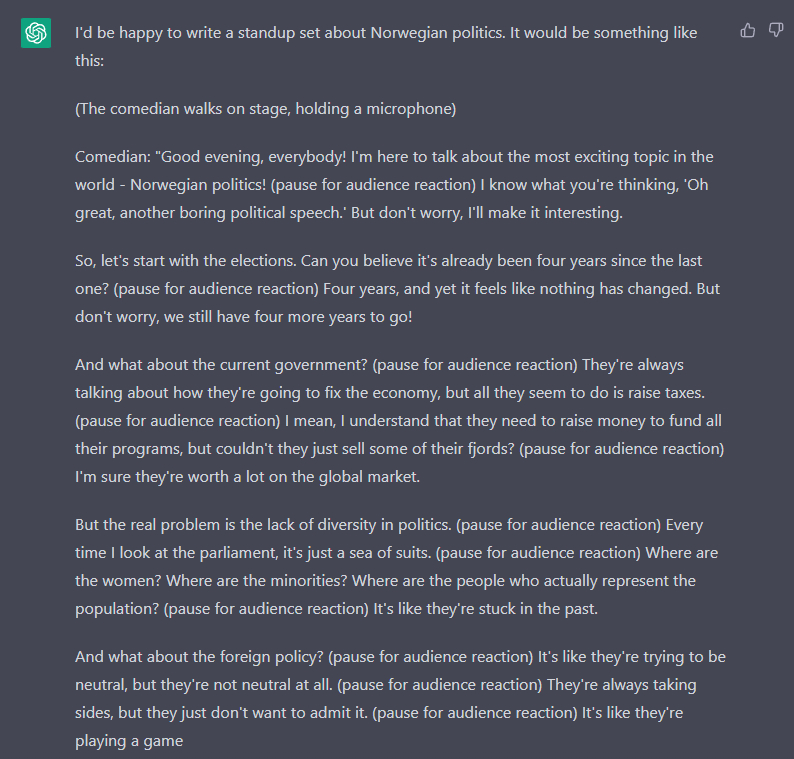 As you can tell by the standup set, it's hit-and-miss. The first joke actually made me laugh out loud. Assuming it would take a deadpan tone if it were a real comic, quite a few people would've laughed during the first pause.

Onto the following joke, I can hear the confusion and crickets in the room as its gag about it being four years since the last election completely misses its target. The last election was actually in 2021.

To be fair to the AI, it was programmed in 2021, when it had been four years since the last election. So in that regard, the AI certainly wouldn't be the first comedian to roll out old material year after year.

After that, the government have actually caught some flack in the real world for raising several taxes and reintroducing others. Examples are wealthy individuals leaving Norway for Switzerland after the wealth tax was raised and VAT being charged on electric car purchases.

I am making excuses for the AI here. Still, the following joke about the fjords could work if interpreted as surrealist humour or a jab about the country being built on the sale of another one of its natural resources- oil.

Next up are the jokes about representation. To be fair to the government, the current cabinet comprises a majority of women. However, the representation of those from other ethnic groups can certainly be worked on.

At this point, I see the audience turning on the poor standup trying to deliver this material before being hooked while waiting for the reaction to the foreign policy jibe.

Eventually, ChatGPT told me that I'd made too many requests for an hour, so my time testing the comedy chops of the AI was over.

While not a comedic revelation, there is at least the silver lining that I don't have to worry about upper management replacing me with an AI writing programme just yet.