Due to the Arctic conditions and tiny population, policing on the island is unorthodox. Pictured: A guide walks with his rifle on his back on near Lonyearbyen on Spitsbergen island, in Svalbard Archipelago, northern Norway. Photo by Jonathan Nackstrand / AFP

A tiny Arctic police force on these islands halfway between Norway and the North Pole keeps outlaws — and polar bear botherers — at bay.

Its 12 officers dash around on snowmobiles, helicopters or in boats keeping the peace among the 3,000 or so hardy souls tough enough to endure the endless winter nights.

“Obviously most cases are pretty trivial,” police chief Stein Olav Bredli told AFP from his office in the main town of Longyearbyen, with its stunning view of the fjord outside.

But Svalbard’s penal code has its own local peculiarities like disturbing a polar bear or boats breaking sea ice. The law takes a dim view of both, with a 1,500-euro ($1,587) fine for bear bothering.

In fact, the most common crime was once said to be shoe stealing — either intentionally or accidentally after one drink too many — because everyone removes their shoes when stepping indoors, even into a public building.

The crime section of the local newspaper Svalbardposten — like almost everything else here, the northernmost in the world — is pretty thin.

“A few brawls after the bars close” is about as much as editor Borre Haugli can hope for.

And yet Svalbard’s residents are armed to the teeth. It’s mandatory to carry a rifle when leaving urban areas in case of a close encounter with a polar bear. Since 1971, six people have been killed by the bears.

Haugli can only recall a single car theft in his two years as the paper’s chief. “It was probably drunk people who, after a party, saw a car with the keys inside,” he said.

Locals usually leave their homes and cars unlocked. It helps when you have to make a quick getaway from a polar bear — and it’s also a sign of the trust required to survive in such a hostile environment.

Besides, where can a thief run to with only 40 kilometres (25 miles) of roads and the only connection with the outside world — beyond a very long boat journey — is the small airport on the outskirts of Longyearbyen?

Yet none of that stopped a Russian from committing the world’s most northerly bank robbery.

He was sentenced to more than a year in prison on the mainland. The bank has since closed.

But until he gave AFP a tour of his station, Bredli said he had never seen its single jail cell. Clearly, it is rarely used.

“That would require a police officer to permanently guard it,” Bredli said, and that’s a luxury his small unit can’t afford.

Beyond the 130 complaints they investigate each year, Bredli’s officers spend most of their time on 24-hour standby for search and rescue missions. With two helicopters at their disposal, they do it all, from helping boats in trouble at sea to finding tourists lost in the mountains.

“Imagine if a cruise ship were to sink, it’s not easy to evacuate 1,000 passengers,” Bredli said.

“It’s one thing to bring the passengers ashore in what would certainly be difficult weather conditions.” But police would also have to “make sure they are safe from the threat of polar bears”.

The ministry said cargo containers had been blocked since they were transported on Russian vehicles, which were banned from bringing cargo over the border, but now containers would instead be brought using Norwegian vehicles.

“It is positive that this matter has now found a solution,” the ministry said in a statement.

It added that two containers with supplies were on their way from mainland Norway to Svalbard on a Norwegian ship.

“It’s important to underline that these solutions have existed all along,” Ane Haavardsdatter Lunde, communications director for Norway’s foreign ministry, told AFP.

The ministry said in its statement that Norway had a “good dialogue” with the Russian side throughout the dispute.

In 2010, Russia and Norway signed a treaty on maritime delimitation and cooperation in the Barents Sea and Arctic Ocean, putting to rest a 40-year-old row.

Norway responded by stressing that Oslo and Russia had a “mutual interest” in maintaining the agreement and that the deal did not have a “termination clause”.

Norway has sovereignty over Svalbard but allows citizens of more than 40 countries to exploit the islands’ potentially vast resources on an equal footing.

Moscow has long wanted a bigger say in the archipelago and insists on calling it Spitsbergen rather than the Norwegian Svalbard.

After President Vladimir Putin sent troops to Ukraine in February, the West has hit Russia with several rounds of unprecedented sanctions. Last week Norway announced nearly a billion euros of aid to Ukraine. 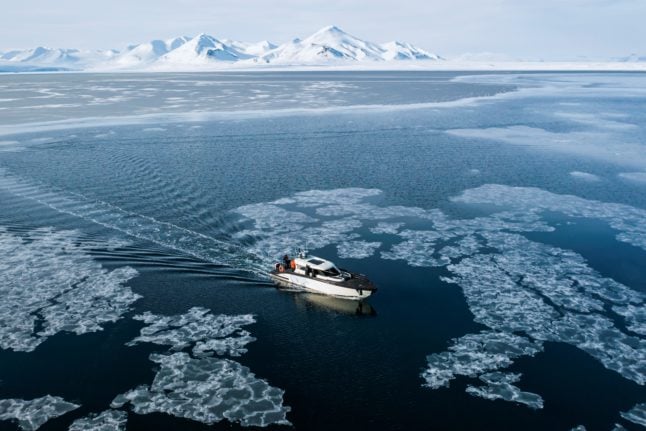