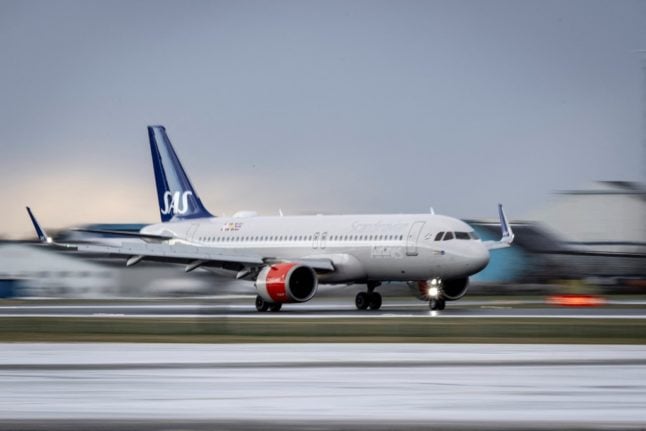 This is what a potential pilot strike means for passengers in Norway. Pictured: An aircraft of Scandinavian Airlines SAS lands at Copenhagen Airport Photo by Mads Claus Rasmussen / Ritzau Scanpix / AFP.

Scandinavian airline SAS and pilots’ unions in Norway, Denmark and Sweden have failed to reach an agreement to prevent a strike, meaning 900 pilots will go on strike this week.

“How on earth is a strike in the busiest week of the last two-and-a-half years going to help us find and attract investors,” SAS chief executive Anko van der Werff told reporters, criticising what he called a “strike culture” among pilots.

SAS and unions had set a deadline of midday Monday to strike a deal. The strike comes after the two parties agreed to extend the deadline for talks several times in the hopes of coming to an agreement.

The pilots are employed by SAS’s parent company, SAS Scandinavia, and announced strike action because they are unsatisfied with their salary and working conditions.

“We deeply regret that our customers are affected by this strike, leading to delays and cancelled flights,” van der Werff said in a statement.

Passengers can rebook equivalent flights for free and are advised to check whether their flight will be affected, SAS said in updated information issued on its website.

“As a precaution SAS offers passengers booked on SAS flights between July 4th – July 9th 2022 the option of rebooking the ticket, free of charge. Passengers can rebook to a SAS flight on another date, within the next 360 days, to the same destination if the same service class as the original ticket is available,” the airline said.

To see if their flight is likely to be affected, passengers are advised to check the status of their flight on the SAS website. Rebookings can be made via the “My Bookings” section.

Passengers who booked their ticket via a travel agent or tour operator should contact them directly, SAS said.

Rebooking may take longer than usual, especially for passengers contacting the airline over the phone. However, the airline also said that there were waiting times for its chat service too.

“SAS apologizes for the unusually long waiting times right now on chat and phone and are doing everything we can to assist our customers,” it said.

400 pilots in Norway to strike

Of the more than 900 pilots that will strike, 402 are based in Norway, according to an estimate provided by Roger Klokset of the Norwegian SAS Pilots’ Association given to broadcaster TV2.

Up to 60 percent of departures from Norwegian airports between Monday and Thursday could be cancelled, according to newspaper VG. This equates to around 585 of 963 flights to and from Norway before Friday.

Flights from SAS subsidiaries, SAS Connect, SAS Link, Cityjet Xfly and Air Baltic are unlikely to be directly affected by the pilot strike.

Cityjet is responsible for many of SAS’s regional flights in Norway, including daily departures between Oslo and Bergen and flights from Oslo to Ålesund.

Travellers can check the status of their flight and the likelihood of it being cancelled here.

What are passengers rights?

Passengers whose tickets are cancelled will have some rights under EU legislation. These include the right to choose between getting your money back, getting the next available flight, or changing the booking completely for a later date.

You are also entitled to assistance free of charge, including refreshments, food, accommodation (if you are rebooked to travel the next day), transport, and communication (two telephone calls, for example). This is regardless of the reasons for cancellation.

EU air passenger rights apply to you if your flight is within the EU or Schengen zone, if it arrives in the EU/Schengen zone from outside the bloc and is operated by an EU-based airline, or if it departs from the EU/ Schengen zone.