Two killed in Oslo 'terror attack': What we know so far

Two people were killed and 21 others wounded in shootings at several bars in central Oslo in the early hours of Saturday in an incident described by police as a "terrorist attack". Here's what's known about what happened, the suspect and possible motive.

A shooting took place at around 1:00 am local time in three locations, including a gay bar in central Oslo.

Police received the first reports at 1:14 am, and the suspect was arrested five minutes later, he said.

The shootings happened near the London Pub gay club, the Herr Nilsen jazz club and a takeaway food outlet.

"He looked very determined about where he was aiming. When I realised it was serious, I ran. There was a bleeding man lying on the ground," a woman who saw the incident told the Verdens Gang newspaper.

According to an NRK radio journalist present at the time of the shooting, the shooter arrived with a bag from which he pulled out a weapon and started firing.

"Some are described as seriously injured, others as more lightly injured," police official Tore Barstad said.

Was it a terrorist attack?

Police have said in a statement that the shootings are being investigated as a terrorist attack.

"There is reason to think that this is about hate crime. That is one of the hypotheses," Christian Hatlo, a prosecutor for the police, said at a press conference on Saturday morning.

NRK reports that the man is not cooperating with police but that his home has been searched.

Two weapons were seized from the suspect, an automatic weapon and a handgun.

What do we know about the suspect?

The shooter's name has not yet been released. However, the man, 42, has been charged with murder, attempted murder and terrorism, police said in a press conference on Saturday morning.

According to the police, the man is a Norwegian citizen of Iranian origin. The suspect is believed to have acted alone.

"Now everything indicates that there was only one person who committed this act," police official Tore Barstad earlier told a press briefing.

The man was known to domestic intelligence services and had had brushes with the law for minor infractions like knife and drug possession, police told a press conference, without naming the suspect.

PST, which handles counter-terrorism in Norway, said that it would hand over any information it had on the suspect to police.

"We now contribute all relevant information we have to Oslo PD, and work to clarify whether more acts of violence may be planned. So far, we have no indications of that," PST said on Twitter.

Prime Minister Jonas Gahr Støre has described the attack as "a cruel and deeply shocking".

"My thoughts go to the victims and their relatives. We do not yet know what was behind this terrible act, but to the members of the LGBT community who are now scared and in grief, I want to say that we are all with you in this," Støre said in a brief statement to newswire NTB.

The London Pub, the location for one of the shootings, said the attack was "pure evil" in a post on its Facebook page.

"The shots outside the London Pub in Oslo are an attack on love. It is an attack on the freedom to love whoever you want," she said in a statement.

The Pride march that was due to take place in Norway's capital Oslo on Saturday afternoon has been called off.

"All events linked to Oslo Pride have been cancelled" following "clear" recommendations by police, the march's organisers wrote on Facebook.

Organisers of the event have asked people who planned to participate in Oslo Pride Festival not to show up. 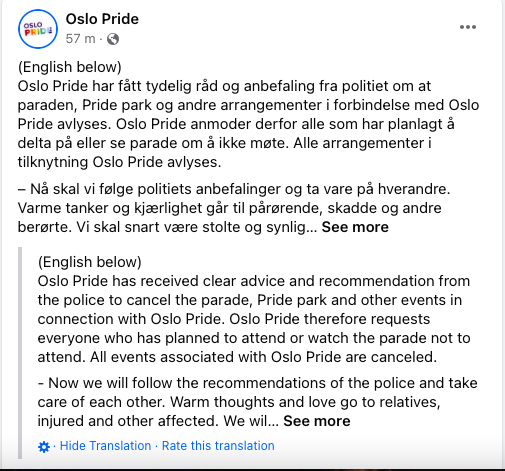 A statement from Oslo Pride on Facebook in light of last night's shooting.