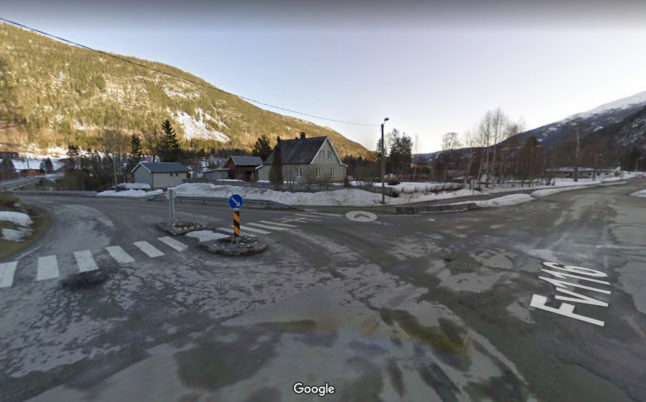 Police confirmed they have apprehended the suspect. Pictured is the intersection in Numedal where the incident is reported to have taken place. Photo: Screengrab from Google Maps.

Police originally said the suspect appeared to have chosen his victims “at random”, but later confirmed that he was married to the woman.

The stabbings took place in the valley of Numedal, Viken County, around 80 kilometres from the Norwegian capital, Oslo.

The incident took place near a bus stop in Nore og Uvdal, a town of fewer than 3,000 people in the Numedal valley in south-eastern Norway. The suspect was arrested at the scene. Both victims were flown to hospital, the woman in a critical condition. The other man, whose relationship to the attacker was not known, was lightly injured, police said.

Broadcaster TV2 reports that the incident occurred near a convenience store in the valley and just by a bus stop.

“Something has happened at the intersection by the store. There are several air ambulances on-site and several ambulances. It seems serious,” a witness who didn’t want which to be named told TV2.

The attacker was restrained by passers-by before police arrived, police said. Norwegian media said a coach driver and high-school students managed to pin him down before police, ambulances and ambulance helicopters arrived at the scene.

Police were notified of the incident just before 9am, and the suspect was arrested between 10-15 minutes later, Kai Redalen, chief of the local fire brigade, told TV2.

The police referred to what they call a PLIVO emergency, meaning an ongoing violent event where lives could be in danger.