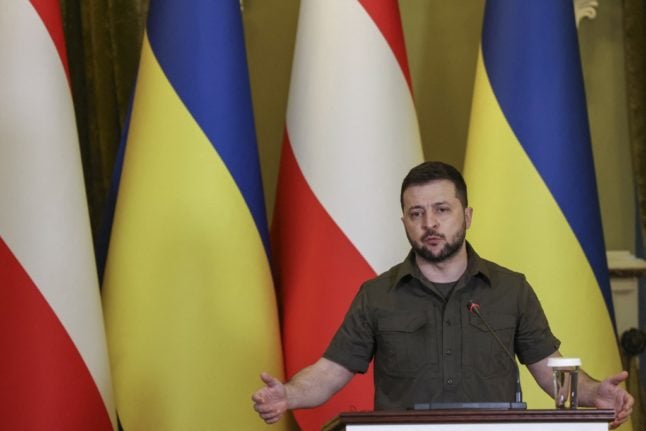 Read about Zelensky thanking Norway, an uptick in air passengers, a Sami drum being returned and a new defence minister being appointed in today's roundup of important news. Pictured: Ukraine's president Volodymyr Zelensky gestures as he attends a press conference with Austria's chancellor in Kyiv, on April 9, 2022. Photo by RONALDO SCHEMIDT / AFP

Zelensky thanks Norway for support

On Monday, Norwegian Prime Minister Jonas Gahr Støre spoke with Ukrainian president Volodymyr Zelensky, who has thanked Norway for its support on Twitter.

Held talks with 🇳🇴 PM @jonasgahrstore. Informed of the course of resistance to aggression, RF’s horrific war crimes. We agreed that all guilty must be punished. Enhancing cooperation, including in energy sector, is on the agenda. Appreciate 🇳🇴 support! We must restore peace in 🇺🇦

Norway’s PM said that the two spoke about the current military and political situation in Ukraine.

“We reviewed the situation and what he is experiencing in the war. There is a build-up of Russian forces in the east and south. He also discussed how he saw the military and political situation,” Støre told news wire NTB.

The pair previously spoke at the beginning of March, and then at the end of last month, Zelensky addressed Norway’s parliament.

Støre also had an hour-long phone call with Vladimir Putin at the end of last month, where he urged the Russian President to end the invasion and allow humanitarian aid.

New defence minister to be named

A new defence minister will be unveiled on Tuesday, PM Jonas Gahr Støre has announced.

The previous defence minister Odd Roger Enoksen resigned after it was revealed that he had an affair spanning years with a much younger woman.

Enoksen started the affair in 2005 when his partner was still an 18-year-old high school student, according to daily VG.

Støre has not yet revealed who will take the post but has said that he is very satisfied with the person who will be appointed.

Ceremony to mark the return of a rare Sami drum

A ceremony will be held in Karasjok to mark the return of a rare Sami drum from the 17th century.

The drum is being returned by Denmark, which previously kept in a museum.

“The return helps us pass on our traditions and honour our ancestors. Until now, we have had to negotiate to get back objects from our cultural heritage, which for various reasons have ended up in museums around Norway, in the Nordic countries or as part of museum collections abroad,” Silje Karine Moutoka, Sami Parliament President, said in a statement.

Nearly 3.3 million passengers travelled to, from and via Avinor’s airports last month, an increase of 260 percent compared to the year before.

The figure for last month is still down by just under 30 percent compared to pre-pandemic times.

“Traffic continues to recover, and it is clear that the desire to travel in society is definitely present,” director of traffic development at Avinor, Gaute Skallerud Riise, said.