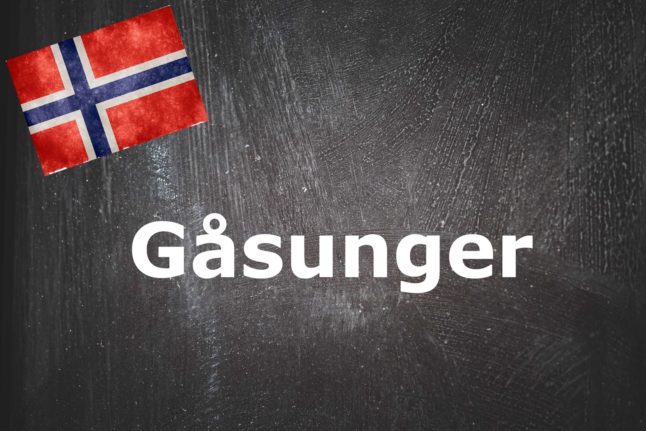 Today's word actually has nothing to do with geese or their offspring. Pictured is a chalk board with "goose children" on it. Caption Photo by Francesco Ungaro on Unsplash / Nicolas Raymond/FlickR.

The word comes from gås, meaning goose, and unger, which is a casual or informal way of saying children- similar to using kids in English. Gåsunger is plural due to the presence of an “r” on the end of the word.

Combined, the word is translated directly to “goose kids”, but more accurately translated it can mean gosling, the proper name for young geese.

Gåsunger are a small, plump, almost-fur like collection of very small flowers found on willows and other plants. In English, the flowers are called catkins.

The flowers are protected by a shell covered with fine hairs, which makes the gåsunger feel like fur or down, hence the name.

Gåsunger is the most common name for the flowers, but they are also called katte labber (cat’s paws) or seljepuser (seal pups) by some.

Gåsunger bloom early, so are considered one of the first signs of spring in Norway. The changing of the seasons brings in warmer weather and longer days. It is for this reason that the goslings are met with such joy each year. They are also popular with kids who will play with them due to their softness.

You can also buy the goslings from florists and supermarkets to have in your home.

There is also a much more practical reason as to why you need to know this word beyond the whims that spring brings.

Gåsunger also signals the beginning of the pollen season in Norway, meaning if you suffer from allergies, it may be time to stock up on antihistamines.

(Spring is here, there are goslings on the trees)