Norway and Russia share a land border in the Arctic Circle and a large maritime one in the Barents Sea. Here's what you need to know about where the border is, how it works and why it's important.

Where is the border?

Norway and Russia share a 196-kilometre land border in the Arctic Circle, in an area referred to as the “High North”.

Despite the long stretch of border, there is only one crossing at Storskog in Norway and Borisoglebsky in Russia. The checkpoint holds the accolade of the northernmost border crossing in Europe.

The reason for the solitary crossing is that the two countries are separated by two rivers that cut through dense forests, the Pasvikelva and Jakobselva.

The border is marked by bright yellow markers on the Norwegian side and red-green striped posting on the Russian side.

The closest town to the border is Kirkenes, about 10 miles away. Many of the road signs are in both Russian and Norwegian.

Below, you can see the proximity of Kirkenes to the border. The grey line is Norway's border with Russia.

At one point of the border, Treirksrøyen, there is a spot that marks the boundaries between Norway, Finland and Russia.

Who is responsible for the border?

The Norwegian Border Commissioner based in Kirkenes, which answers to the National Police Directorate, is responsible on the Norwegian side. The Russian commissioner is based in Nikel.

The Garrison of Sør Varanger is responsible for patrolling the border on the Norwegian side. In Russia, the border is patrolled by the Border Guard Service of Russia and the Federal Security Service.

At the Norway–Russia border, water skiing is now in season! pic.twitter.com/ngsxPhqSNt

How is the border policed?

There are stringent rules and hefty fines for crossing the border illegally. Last year, we reported on a woman who was fined 8,000 kroner when her left hand accidentally crossed the border when visiting the point where the boundary between Russia, Finland and Norway meet.

In addition to crossing the border illegally, “behaving offensively” at the border is an offence that carries a fine of up to 3,000 kroner.

Regional publication Barents Observer reported that four people were fined for throwing stones over to the Russian side, while news agency AFP has reported signs imploring people not to pee on the Russian side of the border.

READ MORE: In Norway, peeing toward Russia will get you fined 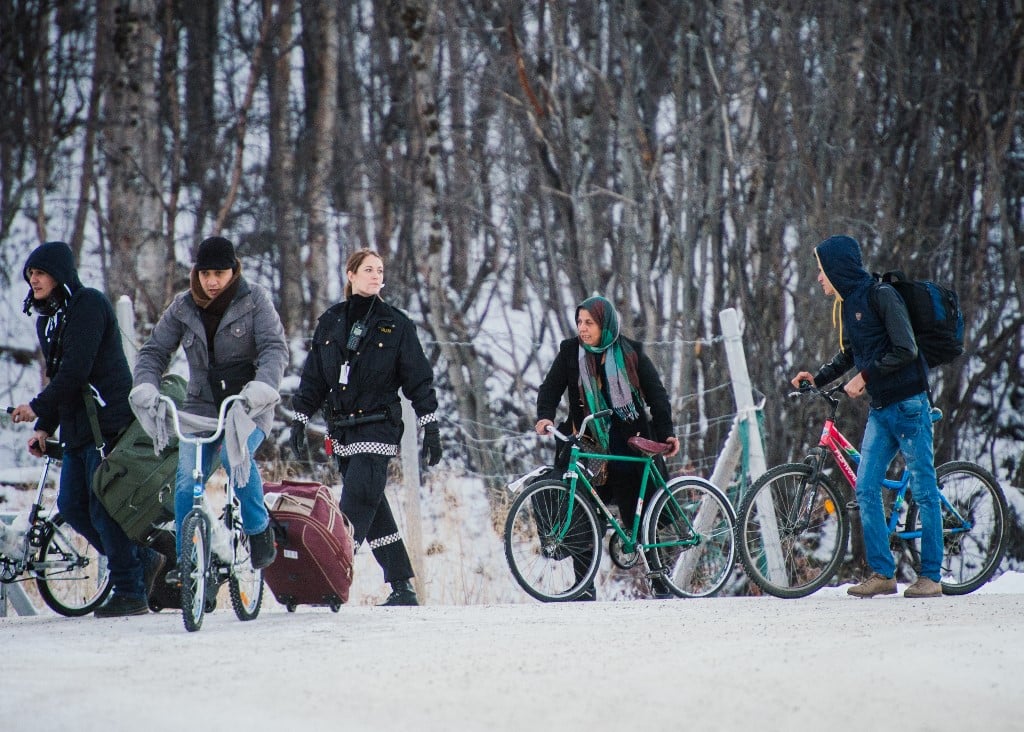 Pictured: Refugees walk alongside there bikes to the Norwegian border crossing station at Storskog after crossing the border from Russia on November 12, 2015 near Kirkenes. Photo by Jonathan Nackstrand / AFP.

What makes the border important?

The border between the two countries makes the pair’s relationship more nuanced and complicated than it may appear at a surface level.

For example, while at the government and high diplomacy level, relations between the two are frosty and have been marred by cases of espionage, the Russian annexation of Crimea in 2014, and now the war in Ukraine, the two countries cooperate on several matters at a regional level in the High North.

“In the High North, we (Norway) have longstanding cooperation with Russia on issues related to search & rescue, nuclear safety, shared fish stocks, oil spill response, ship traffic management, and culture and people-to-people contact,” Hedda Langemyr, director of the Forum for Foreign Affairs and Security (UTSYN), explained to The Local.

“For the communities bordering Russia, the long traditions of friendship and cooperation is highly important. The same goes for bilateral and international research cooperation with Russia,” Lagemyr added.

There is also a special free visa-free zone on both sides of the border where locals can order a special ID card that allows them to travel between the two visa-free. Up to 50,000 people in this area are eligible to benefit from this agreement.

Since the visa-free arrangement was introduced, border trade between the two has picked up.

READ MORE: How much trade does Norway have with Russia

Is there a significant military presence along the border?

Military activity in the High North has increased in recent years. Russia has been consistently increasing its military activity along Norway’s borders and its presence in the Arctic.

Recently, Norway announced that it would spend an additional 3 billion on beefing up its presence in the north.

The money will be spent on increasing its naval presence, intensifying training, increasing munitions stocks and improving the capacity to receive allied troops.

More recently, over 30,000 troops were stationed in Norway temporarily to take part in the Cold Response exercises.

The exercise aims to test Norway would manage Allied reinforcements on its soil, in line with Article 5 of Nato’s charter, which requires member states to come to the aid of another member state under attack.