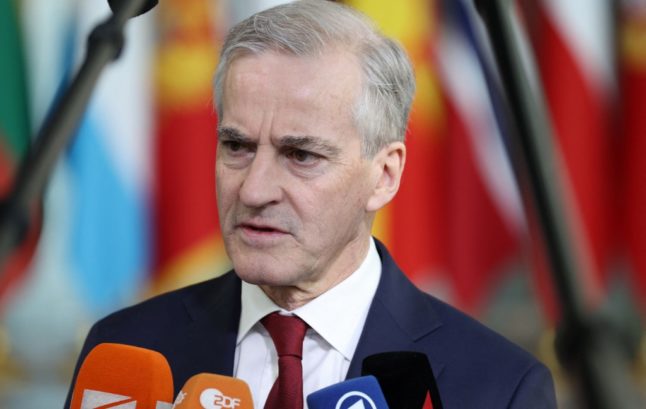 Read about workers potentially being taken out on strike, failing faith in the Norwegian economy, large construction projects being put on hold and more in today's roundup Pictured: Norway's Prime Minister Jonas Gahr Store addresses media representatives as he arrives ahead of an extraordinary NATO summit at NATO Headquarters in Brussels on March 24, 2022. Photo by Kenzo Tribouillard/ AFP.

More than 28,000 employees could be taken out on strike later this week if an agreement can’t be struck between the United Federation of Trade Unions (Fellesforbundet), trade union Parat and the Federation of Norwegian Industries (Norsk Industri) by Friday.

From today the Ombudsman will take over for compulsory mediation after it became clear on Sunday that the parties looked unlikely to come to an agreement. The deadline for agreeing on a wage settlement is Friday night.

Final part of the Gjerdrum Committee’s landslide report due today

The last part of the Gjerdrum Committee’s report will be presented to the Petroleum and Energy Minister, Terje Aasland, newswire NTB reports.

The final part of the report will reveal who the committee believes should be held responsible for the landslide that took place just over a year ago.

PM warns significant infrastructure projects could be put on hold

Large transport and construction projects could be axed or postponed as a result of the war in Ukraine, Prime Minister Jonas Gahr Støre said Sunday.

“We have some large projects related to transport, transport plans, large buildings and facilities which require large investments. We will still have that, but this is the time to look at it honestly and openly,” Støre told regional paper Adressaavisen.

“Both because the economy is such that we now have to make sure that it does not overheat, and because we know that we have to spend more money on emergency preparedness, defence and on receiving refugees, there are some other projects – planned things – that we maybe have to push on and maybe have to say we cannot take on (certain projects),” he added.

Norwegians’ belief in the economy at historic low

The Consumer Confidence Index has hit a historic low and is currently even lower than it was at the outbreak of the Covid-19 pandemic, newspaper Dagbladet reports.

The index is currently down 20 points, compared to the previous bottom of minus 13.3 recorded in April 2020.

“Russia’s invasion of Ukraine on February 24th sent shock waves in all directions. The monthly survey of confidence and expectations of their own and the country’s economy shows a historically large fall in March,” Henrik Høidahl, head of politics and society at data collection firm opinion, told Dagbladet.