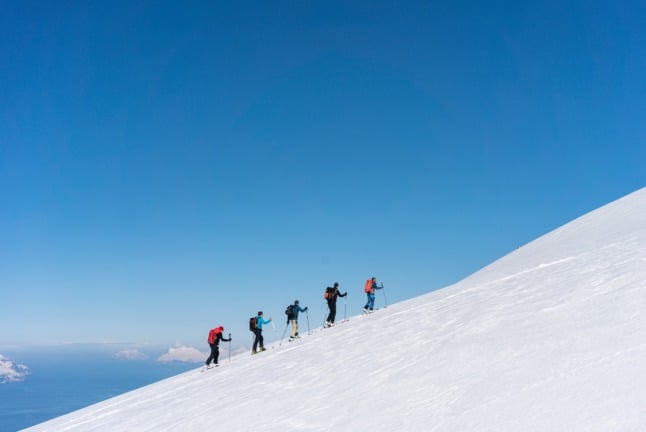 Read about Norway's reaction to Russia's attack on Ukraine, a Labour minister pledging to back tax owed on commuter housing and Norway's population growth in today's roundup of important news. Pictured are skiers on a tour. Photo by Hendrik Morkel on Unsplash

“This attack is a serious violation of international law and endangers the lives of innocent people. The Russian authorities have full responsibility for throwing Europe into this very dark situation. Russia must immediately stop its military actions and respect Ukraine’s sovereignty,” the Norwegian PM said in a statement to news wire NTB.

The PM said the country stood with the people of Ukraine.

Minister of Labour and Social inclusion Hadia Tajik will pay back the tax she owes for receiving free commuter housing between 2006-2010 but denied that she had evaded tax.

The Labour deputy leader applied for free commuter housing, which she was told she would have to pay tax on because she had no other housing expenses before submitting new information that made her exempt, newspaper VG reports.

The minister claimed that she had housing expenses while living at her parent’s home, but she has been unable to document this.

On Wednesday, she said she would voluntarily pay back any tax owed between 2006 and 2010.

“It is important to me that people feel that they can trust me, and my values. So when I can not document the expenses I had in 2006, then it is my own responsibility,” Tajik said in an email to VG.

Norway has temporarily moved its diplomats in Ukraine from Kyiv to Lviv in western Ukraine.

“The embassy will operate from Lviv but has very limited capacity to assist Norwegian citizens in Ukraine,” Foreign Minister Anniken Huitfeldt said in a statement.

The embassy will not be open to the public but will be contactable by phone and email until further notice.

“I urge all Norwegian citizens who are still in Ukraine to leave the country. We have been in contact with those who have registered on reseregistrering.no or in the app Reiseklar to remind them about the travel advice,” Huitfeldt said.

Norway’s population has passed 5.4 million inhabitants, a population increase of 33,900 compared to the year before. The population grew in all parts of the country apart from the north.

Net immigration was higher than the birth surplus last year, which has happened every year since 2005.