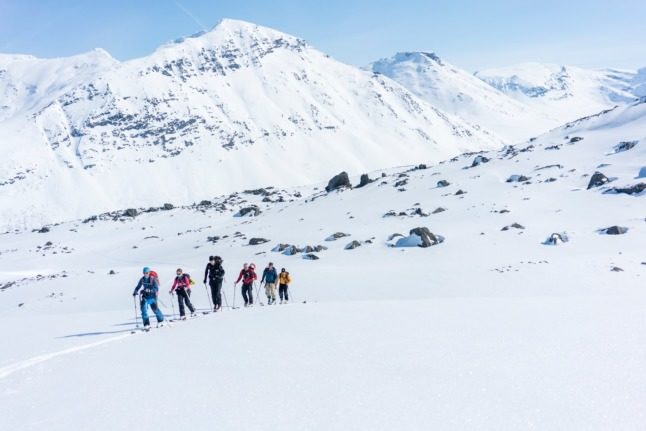 Read about a police raid on illegal firearms, the PM saying more restrictions could be lifted in the near future and unemployment returning to pre-pandemic levels in today's roundup of important news. Pictured are people on a cross country ski trip in the Lyngen Alps, northern Norway. Photo by Hendrik Morkel on Unsplash

The government could ease measures before February 17th

On Tuesday, the government relaxed a large majority of the country’s Covid-19 restrictions, such as recommended limits on the number of guests one could have visit, a table service requirement for the sale of alcohol, and the requirement to work from home were scrapped.

However, Prime Minister Jonas Gahr Støre said at Tuesday’s government press conference that the remaining measures, such as the requirement to wear a face mask and social distance, could be lifted on February 17th if the situation with the virus develops as expected.

However, in more recent comments, the PM has said that some of the remaining measures could be lifted before February 17th.

“We ask the professional authorities to give us advice on an ongoing basis. We will not have such rules longer than necessary,” he told broadcaster TV2 on Thursday.

Unemployment in Norway has continued to fall and is now back to pre-pandemic levels, data collection agency Statistics Norway has said.

In the final quarter of 2021, unemployment was around 3.5 percent, significantly lower than at the same time in 2020 and at around a similar level to the average of the last quarter-century.

“We see that the corona crisis is the event that has led to the biggest peak in unemployment in the last 25 years, but at least so far it has the shortest duration when it comes to an increase in unemployment,” Tonje Køber from Statistics Norway said.

As many as 83 illegal firearms, including shotguns, submachine guns, and rifles, have been seized following a police raid.

The firearms have been linked to a 49-year-old man in the Arendal area. In addition, the police uncovered around 300 advertisements on the listing site Finn.no.

According to prosecutors, the weapons were sealed but were not done so legally, meaning they could be turned into functional weapons.

Typically the sale of weapons isn’t illegal, presuming they are adequately sealed. The weapons were seized in 2020 and the man is set to go on trial shortly.

In January, more than 90,000 Covid-19 infections were registered in Oslo. This is more cases than the entire total for last year.

The figures were published in Oslo Municipality’s weekly report. Around a third of last month’s cases were recorded in the final week of the month.

Adults under 40 have made up the majority of those to test positive for the virus in the Norwegian capital this year.