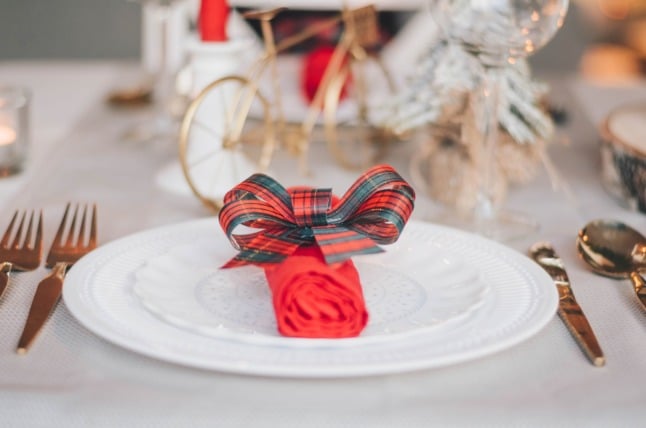 This is where you can find international foods in Norway this Christmas. Pictured is a table set for Christmas. Photo by Libby Penner on Unsplash

Living in another country comes with the excitement of learning to embrace new traditions. This means sampling the local cuisine and trying all the different delicacies on offer during holidays and special occasions.

Despite that, sometimes nothing is better than a small slice of home, especially with the prospect of another pandemic disrupted Christmas this year.

Whether it’s Brits looking for mince pies or other international residents looking for Christmas specialities, it’s all about knowing where to look.

Do you have any suggestions or hidden gems on where to source international food in Norway that we’ve missed? Get in touch and let us know!

Is it possible to get a turkey?

If you feel like having an American or British Christmas dinner, securing a turkey won’t be a particularly arduous task. Lots of Norwegians eat turkey on New Year’s Eve. This means most butchers and large supermarkets should have them stocked already.

Cranberry sauce and goose fat can be fairly easily sourced too (more on that below), if you feel like having all the trimmings. Stuffing is much harder to find though, so you may need to make your own.

READ ALSO: The traditional Norwegian Christmas delicacies you should know about

Not for Icelanders looking for a taste of home, but rather the British supermarket chain. Iceland has been slowly growing its presence in Norway since 2018 and now has five stores, with the fifth opening in Kristiansand in December. The other four stores are in or near Oslo.

Luckily for those who aren’t based near the capital, you can still order online. The store boasts Christmas classics such as mince pies, Quality Street tins, goose fat and cranberry sauce. Christmas puddings, fruit cakes and Twiglets are also on offer.

Unfortunately, although this probably goes without saying, you will be paying Norwegian prices for the products.

You can also find Iceland’s products in selected Europris stores.

If you are after a panettone this Christmas or some guanciale to make an authentic carbonara at other times of the year, then Smak av Italia, taste of Italy, may be the best place to look. They have a stores in Lillogard and Vulkan in Oslo.

The store is also an excellent place for cheeses, pestos, and olive oils, given that the selection in Norwegian supermarkets can be paltry at the best of times.

You don’t have to be in Oslo to make the most of the store either, as, like Iceland, you can order products online and have them shipped to wherever you are in the country.

If you fancy some Spanish Christmas specialities, you can try Smaken av Spania, Taste of Spain, which also allows online delivery.

If you have a sweet tooth, you can also order American Christmas candies, as well as classics such as Reece’s and Twinkies, from megacandy.no. As the company is based in Norway, there are no tolls to worry about. However, deliveries may take up to one week to arrive when accounting for shipping and delivery. In addition, the site warns that delivery may take longer during holidays and busy periods.

Ordering from Sweden, specifically Coopers Candy which stocks American, English and Japanese confectionery, is also an option. All prices include VAT and customs. Deliveries are shipped within 1-3 days, and delivery takes 2-6 working days.

If you are planning on making a pumpkin pie this Christmas or tried to make one this Thanksgiving then you will know pumpkin puree can be hard to find if you don’t know where to look. Unfortunately, even if you know where to look, it can still be tricky. If you do fancy making a pumpkin pie this Christmas, then Meny and Jacobs have been known to stock it frequently.

However, as of writing, canned pumpkin puree is unavailable on either store’s websites.

Americans living in Oslo have said that they have been available to pick up canned pumpkin puree, as well as dried cranberries, at Juels 33 Kolonial in Frogner. The Local has contacted the store to double check, but has yet to hear back.

When it comes to eggnog, you won’t be able to find the pre-made stuff in Norway. However, eggnog or eggelikør in Norwegian is popular in Norway, so you may be able to get it while out for drinks, or you can make your own.

Other places to find international food

Generally speaking, small independent frukt og grønt or grocery stores are some of the best sources for finding international food in Norway.

Most big towns, some smaller ones too, and cities in Norway will have at least one supermarket specialising in foods imported from all over the world. Typically, these stores will be mostly stocked with specialty products and produce from Africa and Asia. However, they are also a good source of Mediterranean and eastern European foods.

The imported and international products found in these stores are also typically cheaper than in larger supermarkets. Unfortunately, most of these stores don’t have websites, so you’ll have to see for yourself what they have to offer and which items they’ve stocked that remind you of home.

MatMarket is an online store that delivers around the country and has food from Latvia, Lithuania, Poland, Germany, Macedonia, Russia and other countries from around the world.

British Corner Shop is another option for Brits in Norway, although they ship from the UK meaning slower delivery times. 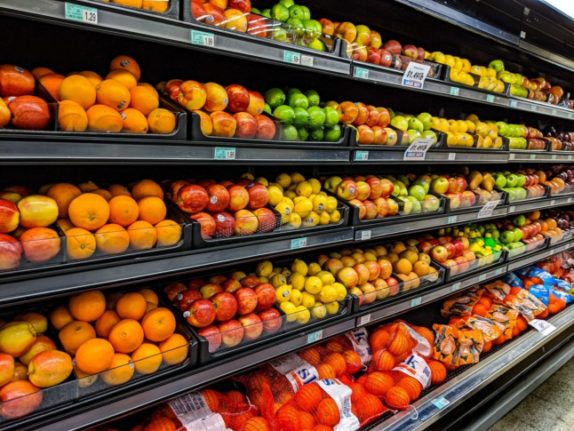 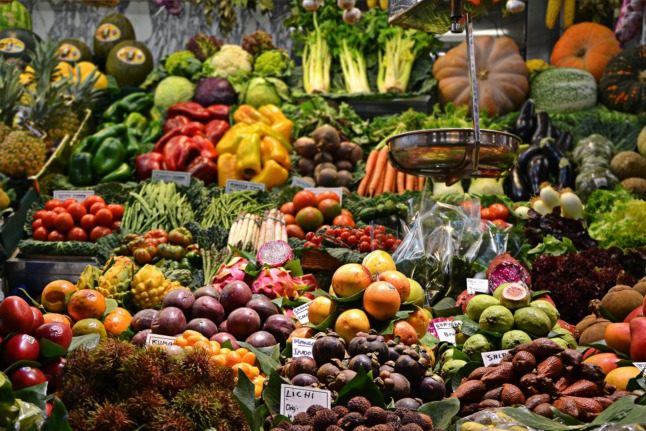 Fruit and vegetable groceries are normally great places to find international food. Pictured is the fruit stall of a green grocers. Photo by ja ma on Unsplash

Living in another country brings the excitement of embracing a new cuisine and finding your favourite local dishes, delicacies and snacks.

However, sometimes the thing we can crave the most is a small slice of home or a creature comfort you can’t find in Norway.

Whether it’s Brits looking for “proper” cheddar, other international residents looking for key ingredients to make dishes that remind them of home, either way we all eventually end up looking for something from back home.

Do you have any suggestions or hidden gems on where to source international food in Norway that we’ve missed? Get in touch and let us know!

The British supermarket chain has slowly grown a foothold in Norway since opening its first supermarket in 2018 and now has five stores. Four of those are based in and around Oslo, with a fifth recently opening in Kristiansand.

Thankfully, for those who don’t live near the capital, you can also order online, but the selection may not be as comprehensive on the web as it is in stores.

The online product range has everything from salad cream and marmite to teabags, chocolate and stock cubes.

One tongue in cheek complaint that residents tend to have about Iceland is that despite some of the packaging having UK prices on them, they are still required to pay the full Norwegian price.

Some Europris stores have also been known to stock items from Iceland’s product range, and other UK favourites. However, this is more of a lucky dip, and there are no guarantees.

The Mega Candy website boasts a wide array of primarily American confectionary, and is based in Norway, meaning there are no tolls to pay on any orders.

The store stocks all-American classics such as Twinkies, Reese’s and Hershey’s. Deliveries are shipped within 1-3 days, and delivery can take between 2-6 working days.

An online store that delivers around the country and boasts items from Latvia, Lithuania, Poland, Germany, Macedonia, Russia and more.

The store offers home delivery if you live in Oslo but sends other orders from across the country as orders via the postal service.

Another store that mainly focuses on candy, but with a growing product range. The store stocks a mix of UK, American and Japanese confectionary.

Among the drinks it stocks are Irn Bru and root beer. Unfortunately, both of these can be tricky to find regularly in Norway, so Coopers Candy may provide a more reliable source of securing yourself some bright orange fizz.

The store also offers plenty of dried goods, as well as soups. For American readers, you’ll be pleased to know they stock tins of Campbells, and for readers from the UK, they stock Cup A Soups.

Also among the selection of dried foods are ramens. Coopers Candy also has a wide range of teas on offer to from Tetley to Yorkshire Tea.

Interestingly, the site has started stocking products from Mexico, meaning that if you wanted to add a bit of authenticity to your taco Fredag (taco Friday) you could order some spices and marinades.

Coopers Candy’s products are shipped from Sweden, but VAT and tolls are included in the price.Deliveries are shipped within 1-3 days, and delivery takes 2-6 working days.

If you are after a taste of something a bit more Mediterranean, then the Smak Av (taste of) stores could have something for you. They have stores in Lillogard and Vulkan in Oslo.

They stock meat too, perfect if you are after some guanciale to make an authentic carbonara or cured meats.

There’s Smak Av Spania, which includes everything from tapas and paella kits to Serrano ham.

Both stores allow for online orders, so it doesn’t matter where in Norway you are.

Norway’s state-owned wine monopoly is an excellent source of finding alcoholic drinks from back home. However, if you live in a small town, then you’ll know polet’s selection can be pretty limited.

Fortunately, you can order drinks from all over the world online and have them shipped to your local wine monopoly.

Generally speaking, small independent grocery stores are some of the best sources for finding international food in Norway.

Most big towns, some smaller ones too, and cities in Norway will have at least one supermarket specialising in foods imported from all over the world. Typically, these stores will be mostly stocked with speciality products and produce from Africa and Asia. However, they are also a good source of Mediterranean and eastern European foods.

The imported and international products found in these stores are typically cheaper than in larger supermarkets. Unfortunately, most of these stores don’t have websites, so you’ll have to see for yourself what they have to offer and which items they’ve stocked that remind you of home.

The site has been a go-to spot for UK nationals all over Europe for a while, and they do deliver to Norway. Although it may be advisable to try and order from other places first, as while residents complement the site’s wide range of products, they have warned of tolls and long delivery times.