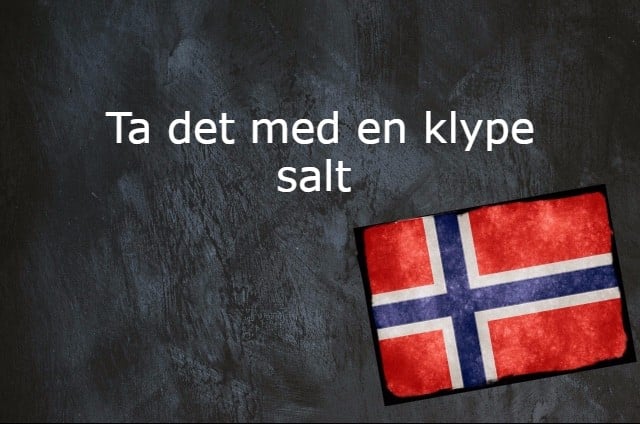 Some Norwegian expressions have the same meaning as the English versions. However, other’s don’t translate as easily.

Have you ever heard someone say ta det med en klype salt? You may struggle to find out what is true.

When directly translated, ta det med en klype salt means, “take it with a pinch of salt”.  Luckily for those familiar with the English language, the expression means the same in Norwegian as it does in English.

Taking it with a pinch or a grain of salt means to not take a story or piece of information you are hearing too seriously. A healthy dose of salt, or skepticism, should be used in some cases.

Ta det med en klype salt may mean the same in English, but its origin is ancient. There are two potential explanations.

The first explanation goes that the expression stems from food being easier to swallow with a helping of salt, or adding your own interpretation to what you are given (or being told).

Other sources show the idiom comes from the fact that swallowing salt can be effective against swallowing some poisons.

Simply put, ta det med en klype salt means to not take everything someone says too literally or seriously.

Ta det jeg sier med en klype salt og le av det. – Take what I say with a pinch of salt and laugh about it.

Ikke bli provosert over hva han sier. Vi må ta det med en klype salt – Don’t be disturbed by what he says. We need to take it with a pinch of salt.