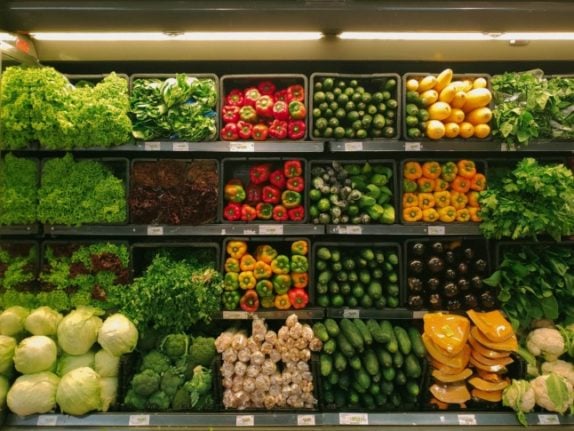 Supermarkets and suppliers are facing increased costs, which they say will be passed onto consumers. Pictured is a vegetable aisle in a supermarket. Photo by nrd on Unsplash

Food bills in Norway could be set to rise in the not so distant future, with suppliers and supermarkets feeling the squeeze of soaring costs.

A price crunch caused by steep increases in the cost of transport and raw materials used to make all types of foods could soon be felt by consumers. Suppliers say they are faced with no choice but to raise prices.

“It is an extreme situation, with incredibly high commodity prices. Sugar is up 40 percent, vegetable oil is up 60 percent, transport from China is ten times as expensive, and often there are delays as well,” CEO of food and consumer goods company Orkla, Jaan Ivar Semlitsch, told financial publication Dagens Nærsliv.

He said that future price rises would be inevitable as a result.

“There will be price increases. It is absolutely necessary. There hasn’t been a situation like this for 20 years,” Semlitsch said.

Orkla isn’t the only food giant in the country warning of a price hike. Agra, which owns Mills, most known for its mayonnaise, also said that increased costs at the checkout were on the horizon.

“It is hard to see this not leading to higher prices. It is a broad picture of unusually high price increases,” Agra CEO Knut K. Heje told DN.

Heje also pointed out that it wasn’t just the price of key ingredients and raw materials going up, but also what the company needs to manufacture and package its products.

“Commodity prices are up dramatically. The price of rapeseed oil has risen 70 per cent in the last year, and the price of our most used plastic and aluminium has increased by 50 per cent,” Heje said.

READ ALSO: Why coffee in Norway could be pricier in 2022

“On a general basis, I think (customers will notice the changes). How it will affect the individual supplier and brand, it is not correct to comment,” Ringnes boss, Anders Røed, told DN.

Norway could also face “missing deliveries” caused by problems with the global supply chain, according to Petter Haas Brubakk, head of FoodDrinkNorway.

“There has been a halt in the supply chain, which has meant that it has not been possible to work as usual. The concern is that there will be cost increases and delays, perhaps even missing deliveries in some places. Then I will be cautious with saying what that could mean for prices,” he said.

“We must hope this (a food crisis) does not happen. But there is every reason to follow this very closely. Although we may have put the pandemic behind us, many countries are reporting bigger issues than before. This highlights the importance of local production,” he added.