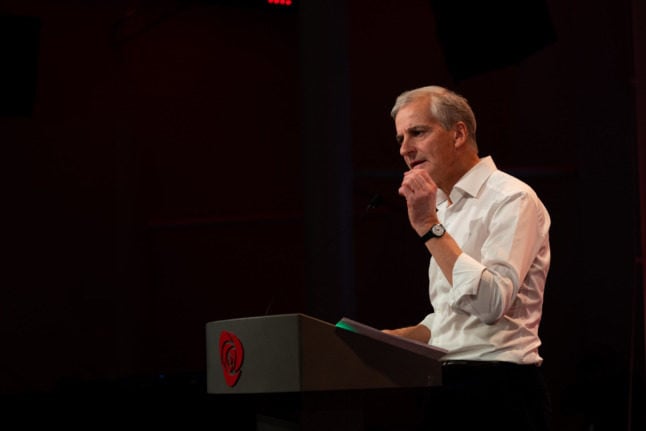 Jonas Gahr Støre, pictured at a Labour Party event, along with Centre Party leader Trygve Slagsvold Vedum unveiled the policy platform for the new government. Photo by Arbeiderpartiet on Flickr.

The incoming government, formed from the Labour and Centre parties after the parliamentary elections in September, said it wished to reduce greenhouse gas emissions by 55 percent of their 1990 level by 2030.

Climate ambitions had so far targeted a range between 50 and 55 percent. The aim for the top of the range was included in the government’s policy platform, presented Wednesday after several weeks of negotiations.

The new government is due to take office on Thursday under the leadership of the Labour Party’s Jonas Gahr Støre.

It also announced it would honour a plan to raise the country’s carbon tax to 2,000 Norwegian kroner ($230, 200 euros) per tonne, up from the current 590 kroner. And the new coalition also reaffirmed its commitment to the country’s oil industry.

“The oil and gas sector will be developed, not dismantled,” the two parties said in their policy roadmap.

“Climate policy must not be moralising and must be fair,” they added.

Most of the emissions generated by Norwegian oil and gas occur when it is consumed outside Norway and are therefore not included in national figures.

The oil sector accounts for 14 percent of Norway’s gross domestic product, as well as 40 percent of its exports and 160,000 direct jobs.

With the new climate target, Norway is bringing itself in line with the European Union, of which it is not a member.

Oslo is closely associated through its membership in the European Economic Area (EEA) and the Schengen free-travel area. The two-party coalition will only control 76 seats in the 169-member Norwegian parliament and will rely on negotiations with other parties to pass laws.