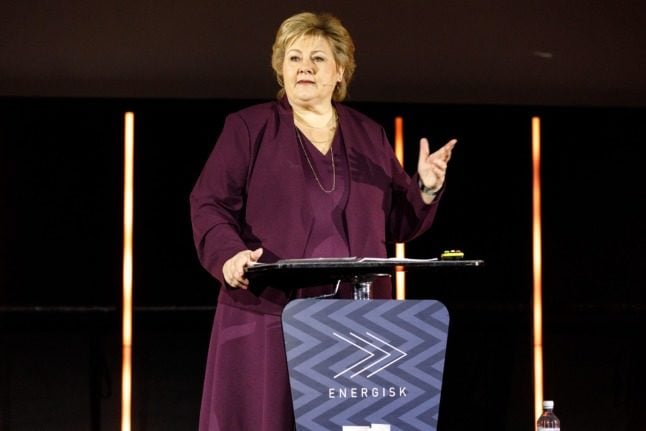 Erna Solberg pictured speaking at an event in 2020 has formally resigned as Norwegian Prime Minister. Photo by Norsk olje og gass on Flickr.

King Harald has accepted Erna Solberg’s resignation as prime minister following the proposed Norwegian state budget for 2022 being unveiled and ahead of Labour leader Jonas Gahr Støre taking the reigns. Støre is expected to form a government and become PM on Thursday.

“He has accepted this (the resignation) and asked me to lead a business ministry until a new government is appointed,” Solberg, who has been the PM since 2013, told the press on Tuesday.

“It is sad to leave the helm when the Norwegian economy is doing well,” Norway’s longest-serving right-wing leader added.

READ ALSO: How Norway’s proposed state budget for 2022 could affect your finances

Solberg said she was proud of the progress Norway had made under her leadership.

“I am proud that Norway has taken many important steps. I believe we have pursued a policy that equips Norway for the future,” Solberg said.

The Bergen native remarked that she was grateful to have been PM for so long.

“I am grateful because there are few people who can sit for so long,” she said.

The King has formally tasked Jonas Gahr Støre with forming a government following a meeting between the pair at 2pm. Støre and Centre Party leader Trygve Slagsvold Vedum are expected to unveil their cabinet at Hurdal, where government negotiations have taken place, on Wednesday.

Solberg told reporters that she was relishing the chance to be in opposition.

“We will pursue a clear but constructive opposition policy. This country needs broad cooperation,” she said.