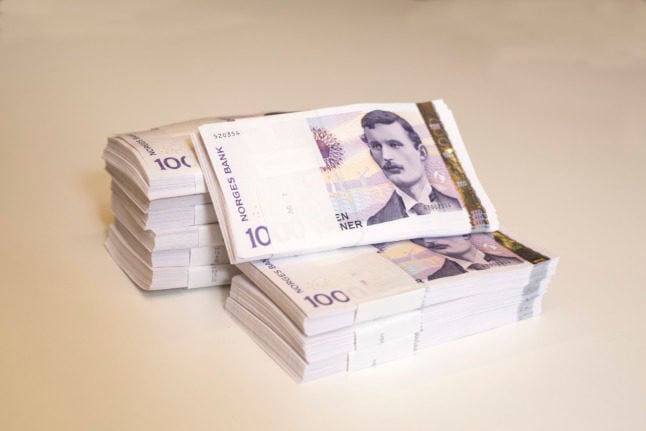 The two men got a lot more than they bargained for when looking for a good camping spot. Photo: Norges Bank/Nils S. Aasheim

The two men were scouting out the forest near Mossemarka, Viken, South-East Norway, to see whether it would be suitable for a family trip and reached a memorial site where the Norwegian resistance stored weapons and equipment during WW2.

Around 200 meters or so from the war memorial, Ole Bisseberg and his friend spotted something that looked unusual behind a rock.

The friends, curious, began to look around to see if any exciting artefacts had been left behind from the war when they stumbled upon a tiny cave.

“The cave was cramped and relatively unexciting.  But we had no idea what was waiting for us,” Bisseberg told newspaper VG.

In it, they discovered a bag with four large wads of cash wrapped in duct tape inside.

“When we found the money to say we were surprised would be an understatement,” Bisseberg said.

The banknotes, a mix of 500 and 1,000 kroner notes dating back to 1999, and the bag storing the money were weathered and seemed like it had been there for quite some time.

READ ALSO: Hidden costs: What you need to know about Norwegian bank accounts

The two men hurried home with their discovery and counted one of the packages, which contained more than 500,000 kroner, and contacted the police about their find. Bisseberg estimates that there was around two million kroner of cash in total.

Police soon arrived at Bisseberg’s home to ask a few questions, and the pair took the police to the site where they found the haul.

The police have sent the money to the National Criminal Investigation Service, where they will search for DNA and fingerprints on the money with the hopes of tracing it back to somebody.

Head of operations for the Eastern Police District, Terje Marstad, told state broadcaster NRK that while such finds are rare, the public should contact the police immediately should they make a similar discovery.