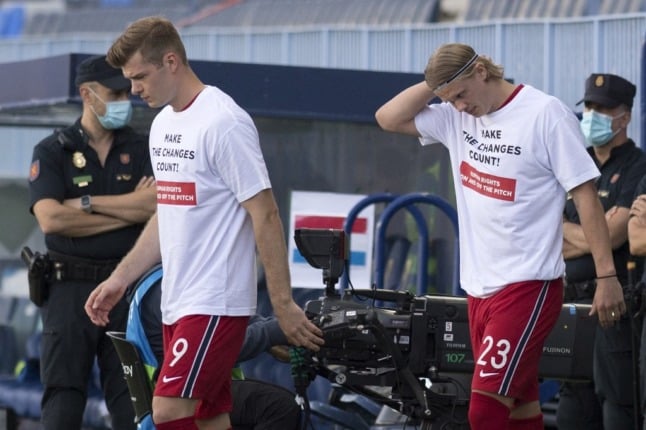 At an extraordinary congress called by the Norwegian Football Federation (NFF), 368 delegates voted for a motion rejecting a boycott while 121 were in favour.

In the run-up to the vote, Ole Kristian Sandvik, spokesman of the Norwegian Supporters Alliance (NSA), said the matches in the Gulf state in 2022 will “unfortunately be like playing on a cemetery,” using a term commonly employed by opponents of Norway’s participation.

Norway, which has not qualified for a major international competition since Euro 2000, is currently fourth in its World Cup qualifying group.

So although qualification seems an uphill task, the result of the vote could have had an impact on whether Norway and its star Erling Braut Haaland — one of the hottest properties in world football — continued to play qualifying matches.

The movement calling for a boycott began when the Tromso IL club spoke out against alleged human rights abuses in February.

“We can no longer sit and watch people die in the name of football,” the first division club said.

Qatar has faced criticism for its treatment of migrant workers, many of whom are involved in the construction of stadiums and infrastructure for the 2022 World Cup, with campaigners accusing employers of exploitation and forcing labourers to work in dangerous conditions.

Qatari authorities meanwhile insist they have done more than any country in the region to improve worker welfare.

A spokesman for the Qatari organisers put the number of deaths on the construction sites at “three” since 2014, with another 35 having died away from their workplaces, challenging the heavy toll reported by some rights groups.

Nearly half of Norwegians, 49 percent, are in favour of a boycott, while only 29 percent are against, according to a poll published by newspaper VG on Wednesday.

Tom Hogli, a former professional footballer turned public relations officer for Tromso IL, told AFP: “There is no doubt that this World Cup should never have been awarded to Qatar.

“The conditions there are abominable and many have lost their lives,” he added.

Feeling the pressure from grassroots campaigns, the NFF referred the matter to an extraordinary congress which on Sunday brought together its eight-member executive committee and representatives of 18 districts and hundreds of professional and amateur clubs.

Discussions revolved around the findings of an expert committee which, with the exception of two members representing fans, had already also come out against a boycott.

Committee chairman Sven Mollekleiv had warned ahead of the meeting that a boycott was unlikely because “you need a critical mass behind it, an opposition that calls for it in the country, the UN to put pressure on the authorities, the business world, the trade unions and civil society to put pressure on it in the long term”.

Rather than a boycott, the committee had recommended 26 measures to consolidate and further the gains made in Qatar but also to ensure that FIFA doesn’t become complicit in so called “sportswashing” — the polishing of a country’s image through a major sporting event.

Norway’s national squad has already protested conditions in Qatar, but stopped short of calling for a boycott.

Before recent games, Borussia Dortmund star Haaland, captain Martin Odegaard and their teammates have worn t-shirts with slogans like “Human rights on and off the pitch.”

FIFA argue that awarding the hosting of the World Cup in Qatar has opened the door to social progress.

“We know there is still work to be done, but we need to recognise the significant progress achieved in a very short time,” FIFA president Gianni Infantino said in May.