When travelling during a global pandemic you need to expect things not to go to plan especially when trying to negotiate Norway's Covid border rules. Norwegian citizen Ingri Bergo explains how her return home to Oslo from Paris meant a spell confined in an airport hotel.

I had been worried about my journey home from Paris to Oslo for a while. I planned it so that I would travel after Norway’s old, strict travel rules expired. What I didn’t foresee was that the new ones, which took effect on May 27th, didn’t really change much.

Norway has long operated with strict Covid travel policies, advising against all unnecessary foreign travel and restricting the categories of foreigners allowed to enter the country.

Tourists can currently just as well forget about even trying. Only Norwegian citizens and foreigners with an address in Norway are allowed in, bar a certain few categories (full list on the government website HERE).

The exception is foreigners travelling in from countries ranked as ‘yellow’ in Norway’s traffic light Covid classification, in other words those with low Covid-rates. But before anyone planning a trip to Norway gets too excited, take a look at the map below, which shows  which countries are currently classed as yellow, according to the Norwegian Public Health Institute (FHI). 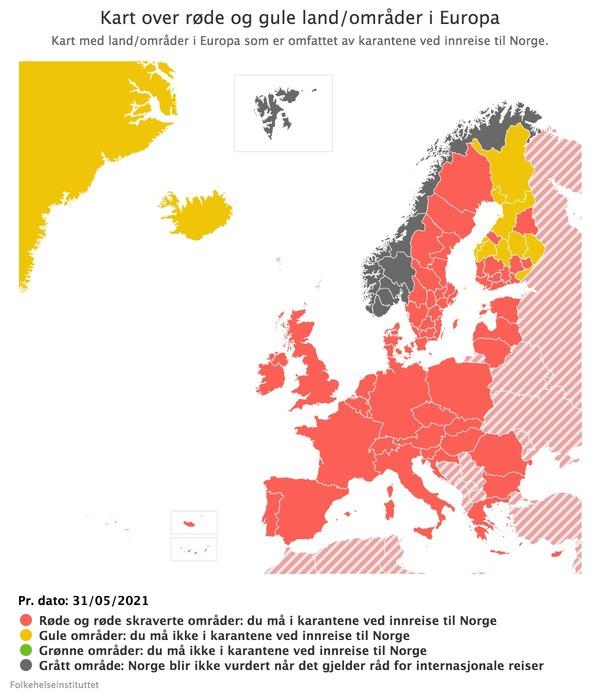 Countries coloured red on the map have an incidence rate above 25, which is why most of Europe has been coloured red. That means compulsory for quarantine for those arriving from red countries, but not necessarily in hotels.

At present, only Greenland, the Faroe Islands, Iceland and parts of Finland have low enough Covid levels to qualify.

So those without an address in Norway or a Norwegian passport coming in from, France or Germany for example, should avoid doing what the man in front of me in the queue at Paris Charles-de-Gaulle airport tried to do and book a flight hoping to slip through at the gate.

“No, Monsieur, you need proof that you live in Norway, they don’t want anyone who doesn’t live there,” said the Air France crew member checking the man’s papers.

‘You have a Norwegian passport Madame!’

The man was visibly desperate, waving his negative Covid results and his flight ticket in front of the crew member, who looked annoyed.

“It’s not enough, do you have proof of address? I need to see your address,” the staff member said.

I slid past them in the second queue before the argument finished, so I didn’t see if he ended up letting him board.

“You have a Norwegian passport, Madame!” exclaimed another flight crew member, beaming at me as he examined my bright-red document. “That makes it much easier for me. Do you have your test results?”

Surreal homecoming to Norway. After nearly 4 hours of queuing for passport checks and Covid test, we were escorted in groups of 10 to quarantine hotels. “Many have tried to run away,” said 1 of the 3 security guards walking us from the airport to the bus to make sure we didn’t. pic.twitter.com/jw25Ay0GB5

Everyone travelling to Norway has to take a nasal swab test – either a PCR or the antigen quick-test – within 24 hours of their departure. The PCR test, which has a higher accuracy rate than the antigen swab, is often held as some kind of golden ticket for travel, so I had done both, just in case.

I didn’t receive the PCR results before the flight and felt my heart pounding as I showed the negative antigen result, prepared to be turned away for some reason I had missed. Maybe I had missed some of the fine print, or maybe the rules had changed in the 20 minutes since I last checked.

The crew member waved me through the gate and I felt silly for having worried about nothing – until we landed in Oslo, which is when the real hassle started.

“Norwegian passports, blue line! Other passports, red line,” an airport security member guided us from the plane and into the queues to get our passport checks.

“Have you registered your arrival?” she asked, waving the printed copies of the required document.

Covid rates in France were below Norway’s threshold

All travellers coming into Norway have to state the reason for their arrival online ahead of the journey. Such measures exist in many European countries and seem reasonable enough, even if the whole concept of freedom of movement within the EU and the EEA/Schengen area (which Norway is part of ) has been rendered pretty much obsolete.

Previously certain professional groups were exempt from Norway’s hotel quarantine, such as journalists or diplomats.

My press card, which had magical powers getting me through police checks at protests in France, was now useless in the passport line.

But under a change to the rules travellers from one of the countries with low Covid levels escape the dreaded hotel. Arrivals exempt from hotel quarantine are those that travel from countries that report fewer than 150 new Covid cases daily per 100,000 inhabitants over a period of 14 days. They also need a positivity rate below 4 percent.

When I spotted this, I got excited, despite having seen the glaringly red map of Europe from Norway’s health authority. Covid rates in France have been steadily dropping since mid April.

According to the French government Covid-19 app, in the 10 days preceding May 26th France had an average incidence rate of 98.7, well below the 150 threshold. I got more excited. If the spread had remained equally low in the days after, arrivals from France should not be subject to hotel quarantine I reasoned. I opened all the relevant tabs on my phone, prepared to calculate the current 14-day incidence rate if needed. The passport check queue at Oslo airport took forever. Several people tried to go to the front, worried they would miss their connecting flight. They all got the same message: queuing was for everyone. There was another queue for testing on the other side. Anyone who missed a connecting flight would simply have to take the next one, the security woman told those trying to push to the front.

Horror stories started going around. One Norwegian man talked loudly about a friend of his who had been put in quarantine in a lousy hotel without any food.

Eventually it was my turn and the border patrol officer checked my papers. None of my arguments mattered, their data said France’s spread levels were too high, end of story. I had to quarantine in the hotel, just like everyone else.

From there, everything kept going at a snail’s pace. In general travellers seemed unaware of the new rules and argued with the border guards to get their own granted exemption, just like I had tried to. We waited in lines to be let into the luggage area in pairs, before queuing again for another antigen test. A woman who had been in front of me since the beginning asked questions to the security personnel. How long would we have to stay in the hotel? Could we get tested out after three days, as we had heard? No one knew.

“This is the worst day of my life,” one guy said on the phone. He had travelled in from the UK and was evidently outraged that he was put through the same procedure as those who had to spend quarantine in a hotel.

You can’t choose the hotel, it costs 500 NOK (€50) per night no matter which hotel it is. Worst is for families who are having to pay for 4-5 people, even if the parents are vaccinated. Meals are included, we get cold servings in plastic packagings delivered in the rooms 🤤

Despite the Norwegian government having confirmed to media that travellers from the UK are exempt from hotel quarantines, confusion reigned regarding which countries were on the list and which weren’t. The man hurried out of the security area after his negative test and no one tried to stop him.

The rest of us had to wait again before getting escorted in groups of 10 to our respective quarantine hotels.

“Many have tried to run away,” said one of the three security guards who walked alongside my group to ensure that we did not try just that.

Countries across the world have taken exceptional measures to stem the spread of Covid-19, European countries too.

‘The hotel was better than feared’

So should it really matter that Norway is being particularly strict with respect to travel? Throughout the pandemic, Norway has consistently reported low levels of Covid-19 compared to other countries, and you could argue that this is the price Norwegians are willing to pay to protect itself from a spike in the virus and subsequent deaths.

The airport hotel – just an hour from my home – turned out to be better than feared. They serve three meals per day (cold, wrapped in plastic and delivered in paper bags). Those who test negative for Covid on the fourth day can go home to do the remaining quarantine period there. You can go out for fresh air and look at the incoming planes. You cannot go to the shop.

It is, however, arguably a waste of resources. The hotel costs NOK 500 (roughly €50) per person per night. (The price is halved for children between 10 and 18 and those under 10 years old can stay in their parents’ room for free.) The remaining fee is paid by the state.

But the real problem with Norway’s approach is that it is poorly organised and confusing for everyone, based on data that sometimes is outdated such as France’s Covid levels, and unnecessarily severe such as fully vaccinated people also having to quarantine in hotels.

Norway has also shown a willingness to put aside its duties as an EEA member. A European monitoring agency said last week that Norway’s travel rules had negatively impacted a “substantial number of people” in the last months, blocking European residents from returning to their homes or jobs.

The hope is that the current rules will be short lived and quickly replaced by the EU’s vaccination passport scheme, which Norway likely will be part of.

In the meantime, I’m going to spend the next three days or so scrolling Instagram from inside my hotel room – which has dark grey walls and windows that don’t open – watching my Norwegian friends celebrating the reopening of bars by drinking outside in the exceptionally beautiful weather. LATEST: Who has to enter quarantine hotels when travelling to Norway?