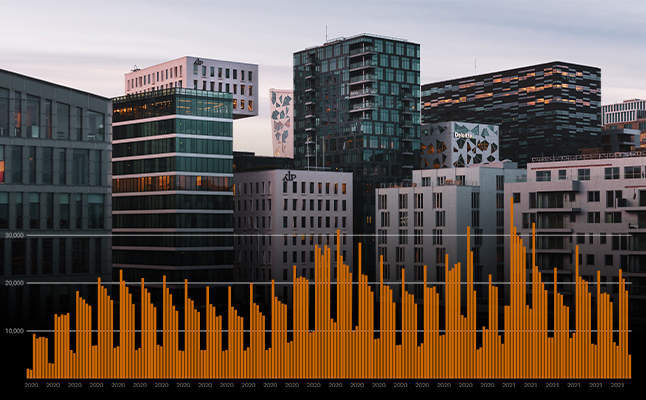 Only 109 people were diagnosed with coronavirus Sunday, according to the Norwegian Surveillance System for Communicable Diseases (MSIS).

An overview by Norwegian newspaper VG shows that the low number is part of an ongoing declining trend where the average number of daily cases has plummeted from over 600 to about 200 in the last month.

But these numbers may give a misleading impression of the pandemic’s development in Norway, as they do not take into account the number of conducted tests, warns newspaper Aftenposten.

And data from the Norwegian Institute of Public Health (NIPH) shows that the test positivity rate continues to fluctuate between 1 and 3 percent.

Aftenposten stresses that a focus on the total number of positive tests may give people a false sense of security. The newspaper states that only an estimated 40-50 percent of coronavirus cases are discovered in Norway.

“We want to ensure that as many infected people as possible are diagnosed, in order to prevent further transmission,” Department Director Line Vold told the newspaper.

“Particularly in areas where the share of people who test positive is higher, we want increased testing,” she added.

Yet Aftenposten points out that Norway tests far fewer people than other countries in Europe, such as Denmark, Spain, France and Belgium.

And Oslo municipality, which accounts for about a quarter of the over 65,000 total cases reported in Norway, last week only tested half as many people as capacity would have permitted.

The reason, according to Aftenposten, is a lack of demand from the public.

“There has been a declining frequency of tests since the first week of the year,” the municipality states in a report.

“This is grounds for concern, as it is not possible to discover new cases unless the population gets tested,” it emphasises.