He rescued terrified youths fleeing the bullets of a fanatical killer. A decade later, Terje Lien is fighting to stop a memorial to the victims.

Lien and a handful of neighbours are battling to change its location, fearing the construction honouring the 77 people killed in Anders Behring Breivik's 2011 attack will make them hostages to a constant reminder of the trauma.

“We have been given a cemetery-like memorial: 77 three-metre-high (10-feet) bronze columns that will stand 75 metres (yards) from our house,” Terje Lien tells AFP.

“The first thing we'll see when we look out of the kitchen window will be these columns,” he adds.

Consisting of 77 columns, the memorial is set to stand on the bank facing the island of Utøya, where 69 people perished on July 22nd, 2011. The other eight victims died earlier in Oslo.

Most of those killed were teenagers attending a camp organised by the youth league of the country's Labour Party.

Disguised as a police officer, right-wing terrorist Breivik tracked and gunned down the youths, shortly after killing eight people in a bombing outside a government building in Oslo.

Called Utøyakaia — or “Utøya Dock” where the ferry departs for the island 600 metres away — the site of the memorial in the village of Hole is next door to the home of the Lien family, which has lived here for four generations.

The 75-year-old retiree still has a vivid memory of the grey summer Friday afternoon, which was coincidentally his birthday.

At first he mistook the bangs for “firecrackers”, and as he saw people diving into the water to escape he thought he was witnessing a “swimming contest”.

Then his grandson came running, shouting: “They are shooting on Utøya.”

The two quickly took off in their family boat; 28 youths were rescued from the cold waters and they also brought a policeman out to the island.

For their bravery, he and other residents who helped were awarded medals and met Norway's King Harald — but he feels the government is not taking their feelings into account.

“But every time we look in that direction, we will be haunted by these memories,” he adds, pointing towards Utøyakaia where construction machines are rumbling. 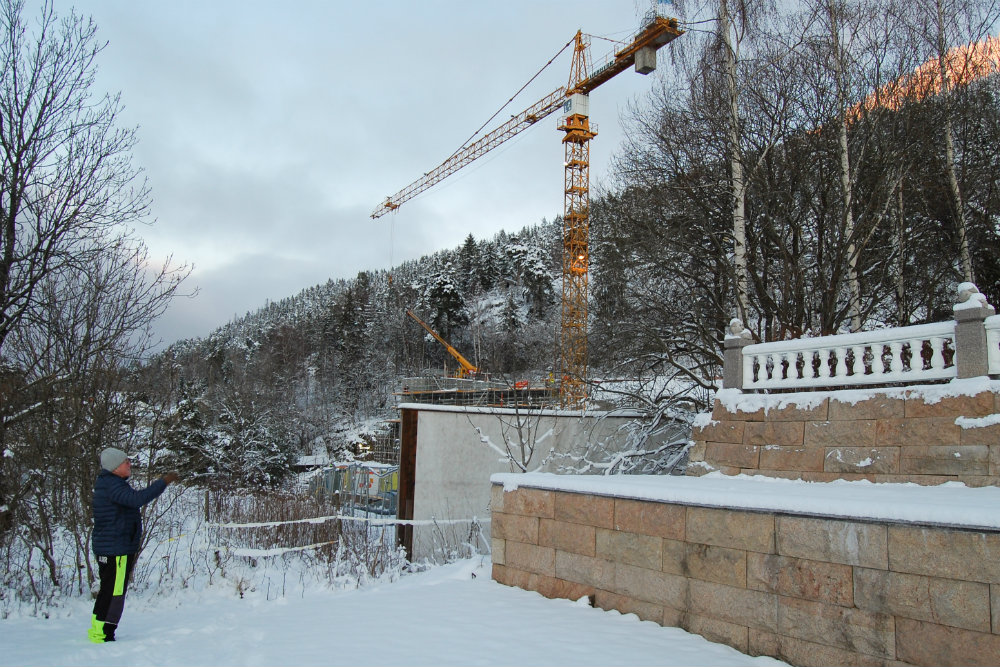 Sixteen local residents have taken the state and youth league to court demanding the memorial be moved, with proceedings currently underway.

The plaintiffs say they fear a permanent “re-traumatisation,” citing a report from a private psychiatric clinic which states that they face a risk of psychological disorders due to the presence of the memorial.

In a country eager to find closure, they have been accused of being selfish and sometimes greedy for holding up the construction.

Lien, for his part, says he offered, free of charge but in vain, another piece of land a bit further away for the installation.

A previous project planned in the vicinity failed in 2017, in the face of opposition from the neighbourhood.

Families can already visit a memorial on Utøya itself, but the new memorial will be open to all.

“For us, it is very important that the memorial is erected at Utøyakaia because that is where almost everything happened” on the day of the tragedy, Lisbeth Kristine Royneland, president of the victims' family support group who also lost her 18-year-old daughter on Utøya, tells AFP.

“This is where the participants in the summer camp travelled to Utøya from, this is where the perpetrator arrived on July 22nd and this is also where a large part of the rescue operations were organised,” Pål Martin Sand, the lawyer representing the youth league at the trial, says.

Psychologists arguing for the relatives of the victims claim there is a “hierarchy of mourning” which would prioritise the sentiments of those closest to the victims and the survivors.

In any case, since the work has already begun it could very well be finished by the time the legal procedures are exhausted.

Authorities hope the memorial will be ready for the 10th anniversary of the attacks this July.

Much to the chagrin of Anne-Gry Ruud, another resident who also remembers the shooting, the sound of helicopters and the bodies of dead children lying on Utøya “as if a bag of colourful sweets had been emptied on the island.”

“So I would have to live every day of my life with a memorial linked to terrorist attacks, and all that that entails in terms of tourists, visitors and the atmosphere of mourning?”