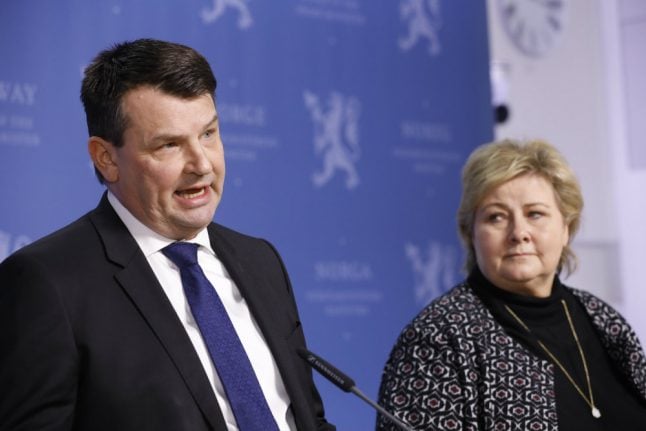 For two years, the case against Laila Anita Bertheussen (pictured in tweet below), partner of Norway's ex-Minister of Justice, has enthralled Norway.

On Friday the court finally delivered its verdict in the case which saw the 55-year-old charged with attacks against democracy and her own home. She was sentenced to one year and 8 months in prison.

The so-called “Bertheussen-case” has dominated Norwegian media since December 2018 when the house she shared with her partner, then-Minister of Justice Tor Mikkel Wara, was vandalised.

Since then, a true and bizarre Nordic crime drama has unfolded.

It involves a radical left-wing theatre troop, a carefully curated selection of ironic handbags, accusations of framing, arson, a detailed analysis of the word ‘peeing’, prominent politicians and even Prime Minister Erna Solberg herself.

It has also raised heated debates on freedom of speech and politics in Norway. Here's what you need to know.

The saga started with the staging of the play “Ways of Seeing” at Black Box theatre in Oslo in November 2018.

The left-wing production was a pointed criticism against racism and power in Norway, including levelling criticism against the former Minister of Justice Tor Mikkel Wara, a member of the right-wing Progress Party.

It also employed some original tools, including footage of the houses of politicians and other people it critiqued. The shared residency of Wara and Bertheussen was included, something Bertheussen reacted strongly to. She accused the theatre of violating their right to privacy in an opinion-piece in newspaper VG.

Bertheussen also disrupted the performance of the play and reported it to the police, but the case was dismissed.

Then, in the middle of the night at the beginning of December that year, Bertheussen and Wara’s house in Oslo was vandalised. A swastika and the misspelled word “rasisit”, interpreted to mean “racist”, was drawn on their house with red marker pen.

The following year arsonists set fire to a rubbish bin next to the house and tried to start a blaze in the couple’s car.

On March 2nd, a threatening letter was left at the house. A similar letter was also send to Minister of National Security Ingvil Smines Tybring-Gjedde, a close personal friend of Bertheussen, and her husband and member of parliament Christian Tybring-Gjedde. The couple had also been critiqued in the play “Ways of Seeing”.

After the attacks Bertheussen and Wara’s residence was put under police surveillance while an investigation was ongoing. And while no suspects were been identified, Prime Minister Erna Solberg (pictured below) said the director of “Ways of Seeing” should consider the play’s role in promoting the attacks. 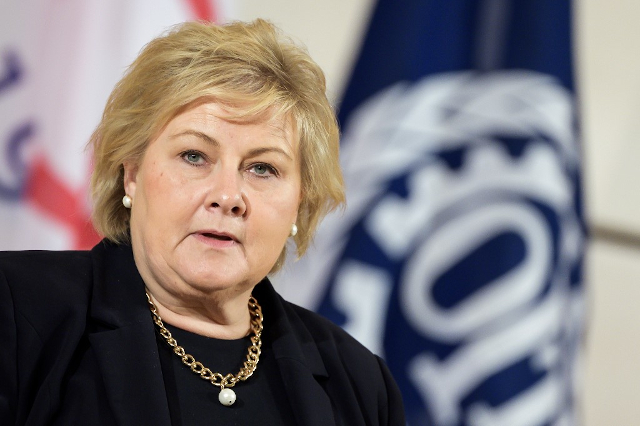 “I think the people behind the play must consider that they contribute to directing attention to politicians and their surroundings,” Solberg said in March 2019, reported the national broadcaster NRK.

“I have to admit that I reacted to the choice to speculate in something like this,” the Prime Minister added.

The comments led to heated debate around freedom of speech, art and political commentary. Erna Solberg had to answer for her statements in parliament.

But the case became even more of a hot potato when it took a dramatic twist.

Shortly after the Prime Minister’s statements, Laila Anita Bertheussen was charged for the threats, vandalism and arson attacks against her car and property.

Norway: the minister of justice's (Tor Mikkel Wara) partner, Laila Anita Bertheussen, has just been arrested for having set fire to her own car! https://t.co/oXKzjn0IZl

Bertheussen was eventually charged with eight accounts of attacks on democracy including arson, vandalism and threats against government politicians, including her partner Tor Mikkel Wara, Ingvil Smines Tybring-Gjedde and Christian Tybring-Gjedde.

The suspicion against her was not reduced even when the police received letters sent by someone claiming to be behind the attacks. The supposedly same person also admitted their guilt in emails sent to the newspaper Dagbladet.

The trial commenced in the fall of 2020, with the prosecution arguing that Bertheussen staged the attacks in order to frame the people behind the play. Wara stood firmly by his partner’s side and he and Bertheussen accused the police of a flawed and one-sided investigation.

The police provided an abundance of technical circumstantial evidence supporting their theory that Bertheussen was the real culprit. Yet no evidence was presented that directly proved Bertheussen’s guilt.

Among the more controversial circumstantial evidence presented, was a detailed linguistic analysis of the word ‘weeing’ (tisse in Norwegian), which had appeared in the threatening letters.

In his expert testimony to the court, linguist Sylfest Lomheim stated that the language in the threats was too soft for a man.

“A man writing a threatening letter would not use these words. The words are not harsh and hard,” Lomheim said, reported TV channel TV 2.

“One example is the word ‘weeing’. Men do not use the word wee, unless they are talking to children,” the linguist added.

This circumstantial conclusion raised quite a few eyebrows in Norway, not least by Bertheussen herself, who had made it a habit to customise the handbags she had in court based on how the trial was proceeding.

She promptly created one stating, “Guilty of Weeing” over a giant shocked emoji. Below it said, “Piss-talk, I say”.

Another notorious handbag carried a depiction of her face, which photographers were forbidden from photographing and excerpts from correspondence sent by the the police attorney.

Another was adorned with a list of what she claimed to be missing evidence proving her guilt.

But on Friday January 15th a court sentenced to her to 20 months in prison for “threatening and attacking democracy.”