Swedish 'mys' looks next in the chain of untranslatable word-based Scandinavian lifestyle trends. If only those writing about it knew that it very often means little more than binging on dreadful tacos and Netflix.

Leaving aside the fact that hygge was actually the lifestyle trend of 2016, the article entirely misses the point of mys, which tends defiantly towards the trashy, and is much more about wrapping yourself in your duvet on the sofa than lounging on the sort of pricey woven quilts sold in the shops mentioned.

Although it's "very similar" to hygge, the New York Times argues, mys is narrower, and "refers more pointedly to an ultra-cozy atmosphere".

This much is true.

While a summer picnic or family bicycle ride can be hyggelig, mys is limited to the 'candles and cocoa' side of hygge. You could probably mysa around a campfire on a summer night, but you couldn't mysa during a walk in the woods.

Danes also debate whether hygge is possible when you're alone (most argue it's by definition sociable). Mys has no such constraints.

While it can be social, you can absolutely mysa alone in the bath, or having a long lie-in. Children might mumble jag vill mysa, "I want to be cosy", when refusing to emerge from their duvets to go to school.

But while hygge is all about making a little bit of extra effort to create the perfect atmosphere, mys is much less fussy.

Surrounding yourself with artisanal candles, and sipping from a top-end red wine is not exactly incompatible with mys, but I'd argue the posher and showier your surroundings and comestibles, the harder true mys is to achieve.

This does not mean mys isn't commercial though. It has in fact been so relentlessly commercialised in Sweden that it's lost a lot of its original meaning. 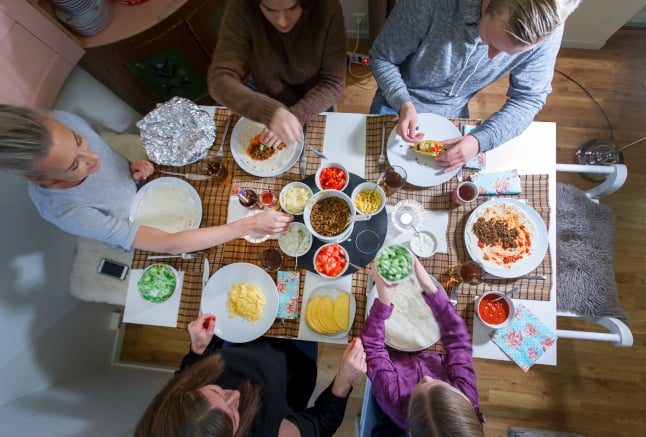 For many Swedes fredagsmys, which happens after work on Friday, is the pinnacle of mys (although if you were being uncharitable, you'd argue this is just a way of putting a positive spin on staying in on a Friday night).

And that the centre of it all is tacos is almost entirely down to the marketing carried out throughout the 1990s by the Swedish businessman Lars-Olof Mattsson.

After he was served some tacos on a friend's yacht off the West Coast, Mattsson decided to launch Tex-Mex food in Sweden, and set up the brand Santa Maria, which now has its own dedicated section in most Swedish supermarkets.

Mattsson is not the only businessman who has cashed in on fredagsmys.

Before the arrival of Netflix, Sweden seemed to have more branches of the video chain Hemmakväll (meaning 'evening in at home') than it had pubs or bars, a worrying sign, I'd argue, of how little time Swedes spend out and about in the evening.

Despite all the mys-based marketing, the old meaning of mys survives, however.

It is the height of mys (and completely free) to snuggle up with your partner or children under a warm duvet long into Saturday morning. Having sex can be mysigt (so long as it doesn't get too energetic).

Another core mys variant, of course is julmys, 'Christmas mys', which describes the calm and cosy Christmas ideal of doing puzzles, making and eating sweets, and slowly chatting over glasses of warm, sweet spicy glögg with friends and family.

What you can bet on, though, is that hardly any of the copycat articles that follow the New York Times' piece on mys (and they will come, I guarantee it), will make much mention of tacos and Netflix.