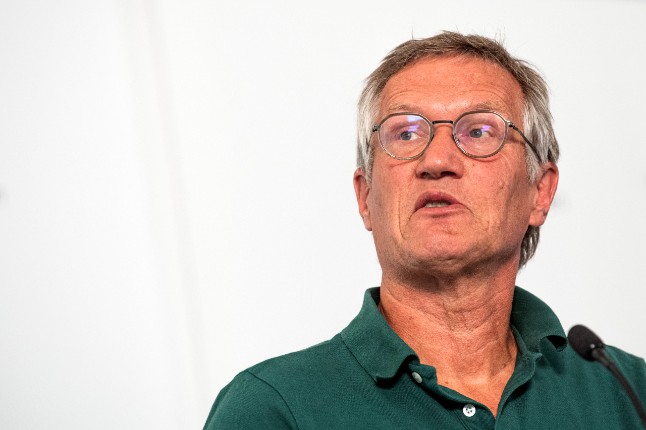 Swedish state epidemiologist Anders Tegnell blamed his country's high death rate on a less severe flu epidemic. Photo: Jonathan Nackstrand/AFP
In an interview published in Sweden's Dagens Nyheter newspaper on Thursday, the country's state epidemiologist Anders Tegnell proposed a new theory to explain his country's high death toll, pointing to the mild flu seasons the country had seen in recent years.
“The new report shows that there is a strong connection between a low excess mortality rate from the flu and high excess mortality from Covid-19, and vice versa,” Tegnell said.
“What people are now seeing is that countries which have a rather low death rate from flu over the past two to three years have a very high excess mortality from Covid-19, while those that have had a high flu death rate, like Norway, over the past two winters, have a low Covid death rate.”
When contacted by The Local, Tegnell's Norwegian counterpart Frode Forland questioned the claim that Norway had in fact suffered more severe flu seasons in recent years.
“There was a rather mild season last year in both Norway and in Sweden,” Frode Forland told The Local.
“When we look at the death toll in Norway and compare it to that of Sweden, it doesn't look like there is that much difference,” he told Dagens Nyheter. “When it comes to to the death toll from influenza in recent years, we're working on getting a detailed picture, but it doesn't look like there has been a particularly high death toll connected to influenza in recent years in Norway.” Norway's state epidemiologist Frode Forland has called for more humility from his Swedish counterparts. Photo: World Health Summit/Flickr
The annual assessments from the European Centre for Disease Prevention and Control don't compare death rates from flu, but they rate Norway's flu seasons in both 2017-2018, and 2016-2017, as “low intensity”, while Sweden had “high” or “medium” intensity seasons.
Forland told The Local that in his opinion, the differences in the death rate in Norway and Sweden stem primarily from the fortunate timing of Norway's lockdown restrictions, which had stopped the spread of the virus at an early stage.
“We have had a relationship between the spread in society and the number of deaths in vulnerable groups,” he said. “It's been proportional, the death rate compared to the number of people infected in society.”
He also argued that Norway's elderly care homes had not done a significantly better job of keeping out coronavirus infection than those in Sweden.
“The number of deaths in Norway and in Sweden are at about the same proportional level at the institutions for the elderly — it's about 60 percent,” he said.