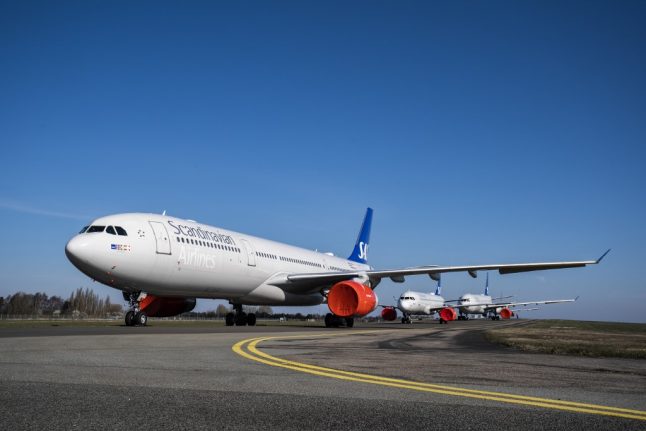 Photo: AFP
The consumer agency concluded that SAS has taken too long to reimburse passengers whose flights were grounded by the impact of the pandemic.
The airline was also accused of misleading those who bought their tickets through a travel agency, Swedish Radio reported.
The Swedish consumer agency began looking into the practices of SAS in spring and its conclusions have now been handed over to the Consumer Ombudsman (KO).
SAS could face a fine or the prospect of being taken to court.
The airline defends itself and told Swedish Radio that the refunds will be paid out.
“Everyone who is entitled to a refund will get their money, but unfortunately for some it will still take time,” SAS's communications manager Karin Nyman told Swedish Radio.
In early July it was reported how SAS had been inundated with demands for refunds for the hundreds of flights that had been cancelled.
“For almost three months, we have cancelled almost 800 daily flights, and this has led to many customers applying for and being entitled to compensation. Unfortunately, it will take significantly longer than usual, and we naturally regret that,” said John Eckhoff, SAS head of media relations for Norway.
The airline had repaid around 700,000 customers but thousands more are still awaiting payments. Around 30 percent have opted for a voucher to be used on an SAS flight in the next 12 months.
You can find more information on cancelled SAS flights HERE and about how to claim a refund HERE.