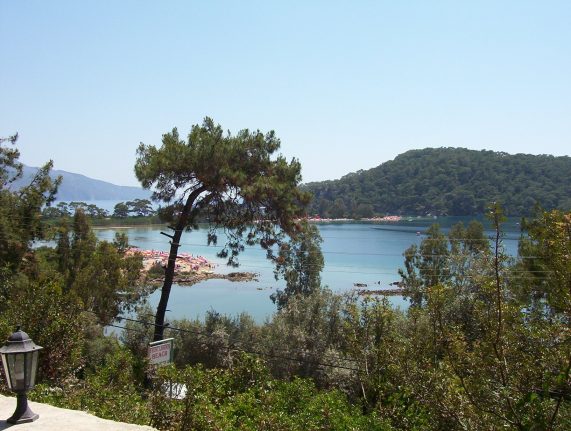 The blue lagoon in the Turkish resort of Ölüdeniz. Photo: Jongleur100/Wikimedia Commons
Kaja Harms has spent the last two weeks in The Netherlands visiting her Dutch boyfriend, even though she travelled there when the foreign ministry is still advising against all but “strictly necessary” trips to the country.
“I’m spending my summer here, hoping that the Netherlands will be on the “green list” from 20 July,” she told The Local. “Otherwise I will use my last holiday week, plus two weekends, in quarantine. It's definitely worth it.”
In a few weeks, Ingunn Lyngstad from Alta in the far North of Norway plans to fly to Turkey to visit her boyfriend — even though there's almost no chance that the country will make the green list.  For her, after six months of separation, ten days of quarantine is also a price worth paying.
They're far from alone. Couples split by Norway's border controls are increasingly meeting up outside Norway.
London is the new rendezvous
Sam Hulbert, from the US, arrived yesterday in London to spend two weeks with his Norwegian girlfriend. Gabriella Lang travelled from Denmark to meet her Norwegian partner in Sweden, where they spent three weeks in a summer house together.
“Totally worth it! He had to quarantine when he returned to Norway,” she told The Local. “I didn't have to when I returned to Denmark (they counted me as someone travelling for work) but I was still careful the first few days.
Nattha Thammarat arrived in London from Norway four days ago to spend 12 days with her American boyfriend.
But is it legal, and does the Norwegian resident risk any sort of sanction?
It is not in any way illegal to ignore the advice to travel to a country only when “strictly necessary”.
“A travel advisory is a piece of advice, not a ban,” the foreign ministry says on its website. “The Ministry of Foreign Affairs can also not guarantee that a journey or stay is safe to carry out. It is up to the individual to decide whether to travel or not.”
However, it may not be possible to get travel insurance if you are travelling against official advice, and the Norwegian government may be unwilling to give you consular assistance if something goes wrong.
What about quarantine?
According to Norway's travel quarantine laws, anyone travelling entering Norway from anywhere apart from regions of the Nordic countries where infection is under control must go into quarantine for ten days.
This is covered by emergency regulations brought in on March 15th, and is a legal duty. Theoretically, you can face fines of up to 20,000 NOK and even risk a six month prison sentence if you break the quarantine requirement.
Is quarantine policed?
According to Norway's justice minister, it is not. “This is trust-based,” she told NTB. “We can't be checking up on what people are doing.”
When a Norwegian citizen returns from abroad, the border police do not report their arrival to police or health authorities, and no one will follow up to make sure they do not run straight to their favourite bar.
“The duty to stay in quarantine follows from the quarantine regulation and is not something that is imposed on the individual, either by the police or by the health authorities,” Jørn Schjelderup from the Directorate of Police told NTB.
Some people have, however, been fined for breaking quarantine, both after travelling abroad and after being quarantined because they have been exposed to someone with Covid-19.
When this has happened, they have generally been caught after a concerned citizen tipped off the police.
In addition, employers may respond badly if they learn that an employee is ignoring quarantine requirements, particularly if they work in healthcare.
Is there any way to avoid quarantine?
Yes, if you can document that you have previously tested positive for coronavirus and now no longer have it, the quarantine rules do not apply to you. But the documentation has to come from a Norwegian laboratory.
“If, by an approved laboratory method from the Norwegian laboratory, you can document that you have undergone covid-19 within the last six months, the rules on entry quarantine and quarantine do not apply to you,” the Norwegian government says on its website.
Is it possible to fly to countries that are not on the open list?
Yes, you can currently fly direct from Oslo to sun-soaked destinations like Palma De Mallorca, Malaga, and Faro. It is unlikely that everyone on these flights is on “strictly necessary” business.