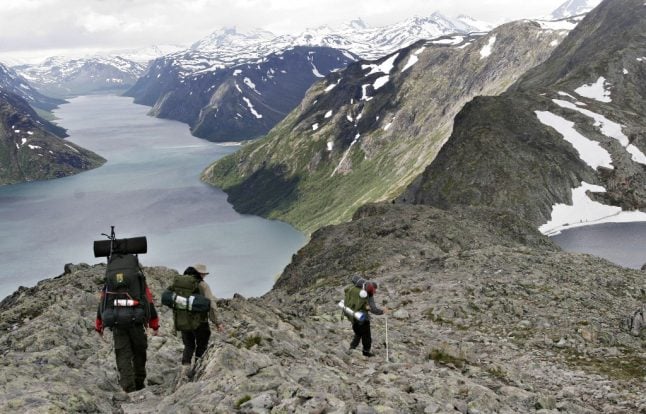 Recent undated photo shows tourists in Norway walking on the edge of Besseggen Mountain along the most famous track in Jotunheimen Park, visited by thousands every week in the summer. AFP
“I believe I’ll never see her alive again”: Bettina Wintermark worries that her adopted country Norway’s pandemic travel ban means she won’t be able to make one last visit to her dying mother in France.
The Scandinavian country, which was quick to bring the new coronavirus under control, has ignored calls to lift, or at least ease, its travel restrictions, making it probably the most closed nation in Europe today.
Most non-residents are still not allowed to enter the country, and while foreign trips are not forbidden for Norwegians, the 10-day quarantine requirement upon return to Norway — in place until at least August 20 — makes travel abroad prohibitive.
As a result, Norwegians will not be able to soak up the sun on the beaches of the Mediterranean this summer — even Prime Minister Erna Solberg has cancelled her planned holiday in Spain.
For some, the government’s cautious tack has serious consequences.
Such is the case for Wintermark, who can’t travel to the southwestern French city of Bordeaux, about a two-hour flight from Oslo, to see her 84-year-old mother, who suffered an internal haemorrhage and whom doctors have given only weeks to live.
Double trouble
“It’s a nightmare,” says the 59-year-old hairdresser.
“If Norway didn’t have these strict restrictions I would have left immediately,” she says. “But it’s impossible to make short trips to France because I can’t go into a 10-day quarantine each time.”
For the same reason, her son’s wedding — initially planned for July 20, also in Bordeaux — has been postponed indefinitely.
“The invitations had already been sent out,” laments Wintermark. “Most of the people coming from Norway had their hotels and tickets booked, and they’re having a hard time getting reimbursed.”
She herself is struggling to get the full deposit back from the local caterer, who couldn’t care less about the situation in Norway.
Broadly hailed for containing COVID-19, which has killed just 248 people in the country of 5.4 million, Norwegian authorities have stressed the importance of not throwing away its sacrifices by opening up too early and allowing a re-importation of the potentially fatal virus.
“A lot of people are sad and frustrated,” admitted Justice Minister Monica Mæland, tasked with coordinating the country’s virus response. “We’re not doing this to annoy people, but because we absolutely have to keep the situation under control.”
In the only concessions so far, Norway, which is not an EU member but does belong to the Schengen zone of free movement, agreed to allow travel to Denmark, Finland and Iceland as of June 15.
Oslo also said it would review by July 20 the possibility of opening up to other nearby countries.
Sweden a pariah
The tourism industry has meanwhile called for restrictions to be swiftly lifted for Germany, which accounts for almost a quarter of all foreign visitors each summer.
“Reopening to this country would be the best recovery plan for Norway’s tourism sector, without it costing authorities a cent,” insisted Per-Arne Tuftin, the head of the national tourism association Norsk Reiseliv.
Meanwhile, Norwegians are still advised not to travel to and from neighbouring Sweden, which adopted a softer approach to the virus and still has a high infection rate, though they are allowed to visit the island of Gotland, which has few cases.
That’s been a disappointment for the 12,000 Norwegian families who own secondary residences in Sweden and who can’t go for the summer holidays.
“Most of the cabins are isolated in the woods or by the water, you don’t see anyone and so you’re much safer than in Oslo, where the beaches are packed,” thunders Einar Rudaa, who started a Facebook group that now has more than 6,000 disgruntled members.
“And we can’t afford to travel in Norway. We bought these cabins to use them,” he argues.
In a sign of simmering anger among a normally law-abiding population, 5.4 percent of Norwegians say they plan to disregard the official recommendations and travel to a destination advised against by authorities this summer, according to one poll.