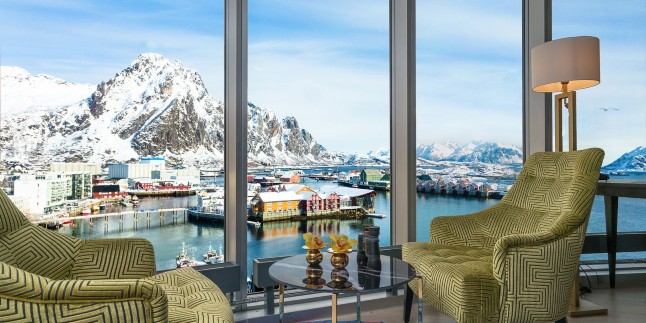 The stunning views from a Panorama Suite at the Thon Hotel Lofoten. Photo: Thon Hotels
Of the 560 companies surveyed by the Norwegian Hospitality Association, 15 percent said that if the government's support scheme is not extended beyond its current expiry date at the end of October, they will have to sack over half their employees.
“The authorities must extend the furlough period over the New Year so that these companies do not have to sack employees unnecessarily,” Kristin Krohn Devold,  the association's chief executive, said in a press release.
“This should have been introduced before the parliament took a summer holiday, but unfortunately it was not.”
Norway's government has agreed to cover 62.4 percent of the salaries of employees who are furloughed, after covering their entire salary for 18 days, hoping that this will reduce the number of people made unemployed during the coronavirus lockdown.
But the travel and hotel industry has been so badly hit that even this has not been enough to prevent layoffs.
READ ALSO:
Devold said that with tourism in Norway still off-limits to people from countries such as Germany, and conferences still limited to 50 participants, tourism companies were still struggling, with 58 per cent of respondents saying turnover had been 50 percent down over the past month compared to last year.
“For many tourism companies, summer is the most important season with earnings  during these months covering the rest of the year,” she said.
Of the companies surveyed 19 percent said they will need sack between a tenth and a quarter of their employees if the support is not extended, and 26 percent said they would have to sack between 26 percent and 50 percent.
“It is quite drastic and serious for such a large industry as tourism,” Erik Taraldsen, director of Thon Hotel Lofoten, told state broadcaster NRK.
“If there's a lack of guests in the autumn, we will not need staff. This is not a threat, it is a reality.”
Torbjørn Røe Isaksen, Norway's labour and social affairs minister, told NRK that the government had not yet decided whether to extend the support package.