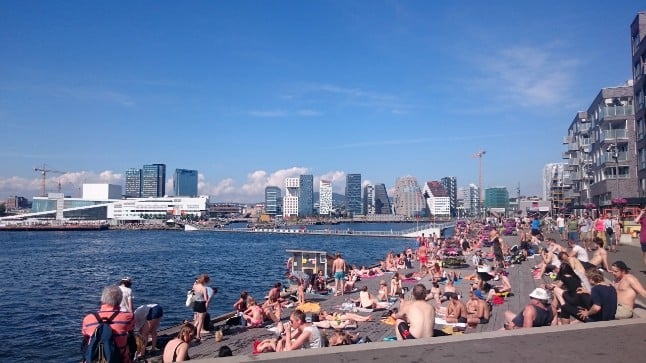 Oslo's Sorenga baths are the perfect place to catch the sun in normal times. Photo: Brand Norway
Espen Rostrup Nakstad, the acting director of the Directorate of Health, said that the recent sunny weather had led to people dropping the one-metre rule.
“The picture we see in Oslo and several other cities in Norway are characterised by the fact that many people are now holding less than one meter distance in public spaces,” he told the VG newspaper. “It worries us.”
Nakstad stressed that even though the level of coronavirus infections in Norway is currently extremely low, he feared that large gatherings still risked triggering an outbreak.
“The accumulation of large crowds is associated with infection risk, even when the infection rates in society are low,” he told the newspaper.
“The distance rule is very important to prevent the spread in general, and that will be especially the case if we are in a situation of increased infection pressure in Norway.”
People in Oslo have recently begun posting pictures of crowded bathing places on social media, such as this picture from Sørenga bad outside Oslo.