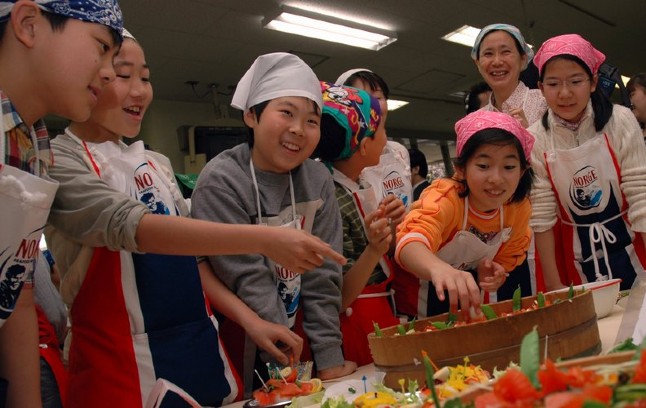 Norwegian salmon is very popular in China. Photo: Sjømat Norge
At a press conference on Tuesday night, Shi Guoqing, Deputy Director at China's Center for Disease Control and Prevention, said the authorities did not believe that the fish carried the virus.
“No evidence has been found that salmon is the origin or carrier of coronavirus,” he said at a press conference, according to Jiemian Daily news.
Norwegian salmon came under scrutiny in China after a recently discovered cluster of new coronavirus cases was reportedly traced to the Xinfadi meat market in Beijing and a chopping board used for cutting up imported salmon.
“The issue is being resolved,” said fisheries minister Odd Emil Ingebrigtsen, quoted by TDN Finans. “We're working out the details today and I can confirm that the issue seems to be resolved.”
Ingebrigtsen said Chinese and Norwegian officials met on Tuesday and concluded that Norwegian salmon was unlikely to be the source of the virus detected last week at the Beijing market.
At least 137 people have been infected since last week in China's capital, a resurgence of infections that has led to the lockdown of several neighbourhoods and the cancellation of more than a thousand flights.
Major supermarket chains including Wumart and Carrefour removed all stocks of salmon in the capital, but said supplies of other products would not be affected, Beijing Daily reported Saturday.
Some Beijing restaurants were not serving any salmon last weekend, according to AFP reporters.
Contacted by AFP, the Chinese embassy in Oslo did not provide any immediate comment.
China, considered a very promising market by the industry, last year imported around 23,500 tonnes of Norwegian salmon.
According to experts, salmon were most likely not the vector of the disease.
“I think it's unlikely,” Bjorn Olav Kvamme, head of the disease and infection section at Norway's Institute of Marine Research, told AFP.
“I would think that the infection is not coming from salmon but rather from contamination of the product or tools by people,” he added, but pointed to the absence of studies on the possible propagation of the virus by fish.
In China, the chief epidemiologist of the Centre for Disease Control and Prevention, Wu Zunyou, said the discovery of the virus on a cutting board “is not enough to certify that it comes from imported seafood”.
“It could have come from an infected person,” he said on Chinese television.
China, considered a very promising market by the industry, last year imported around 23,500 tonnes of Norwegian salmon.
Shares in salmon producers, who have previously suffered from the diplomatic spat between Beijing and Oslo over the award of the Nobel Peace Prize to Chinese dissident Liu Xiaobo in 2010, were boosted by the latest
news.
Shares in Mowi, the world's leading salmon producer, were up by 3.7 percent around midday on the Oslo stock exchange.
Producer Salmar was up 2.9 percent and Bakkafrost 2.3 percent.