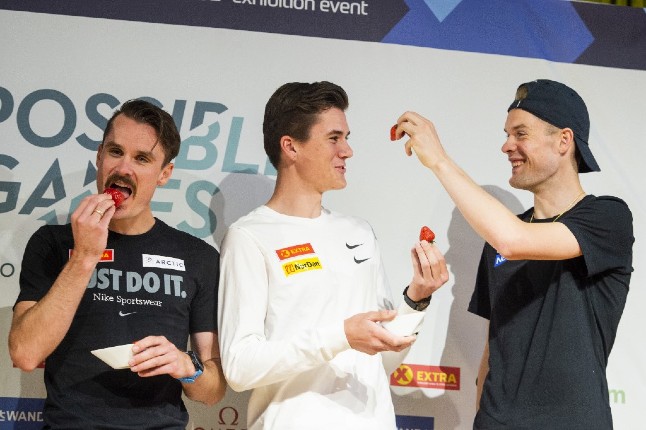 The Ingebrigtsen brothers -- Filip, Henrik and Jakob -- will race in the unusual 2000m for teams against a Kenyan outfit. Photo: Fredrik Varfjell / NTB Scanpix / AFP
Oslo was set to hold its Diamond League meeting this week and organisers have chosen to innovate as the sport returns with its first international, multi-discipline event.
World record holder Armand Duplantis faces 2012 Olympic champion Renaud Lavillenie in the pole vault but the Frenchman has already jumped from his own back garden and his effort will be broadcast in line with his Swedish
counterpart's.
The pair competed last month by filming themselves at home, but the organisers hope Duplantis will improve his record so have invited the required two extra athletes to jump against him in the Norwegian capital.
“I'll be having a drink watching myself jump,” Lavillenie said.
“My jump can't be ratified as my equipment hasn't been ratified, but for now, the most important thing is not to have official competitions and performances,” he told AFP. “It's already huge to be able to have exhibition competitions,” he added.
Elsewhere the Ingebrigtsen brothers from Norway — Filip, Henrik and Jakob — will race in the unusual 2000m for teams against a Kenyan outfit which includes reigning 1,5000m world title holder Timothy Cheruiyot and 2017 champion Elijah Manangoi, who will race in Nairobi.
Double world 400m hurdles champion Karsten Warholm will run alone in the unorthodox 300m hurdles behind closed doors at a near-empty Bislett Stadion.
Warholm's fellow Norwegians, former Olympic champion cross-country skier Therese Johaug and Karoline Bjerkeli Grovdal, also take part, with Johaug racing in the 10,000m, in which she holds the national record, and Grovdal attempting to break her country's 3000m best with the help of guide lights on the track.