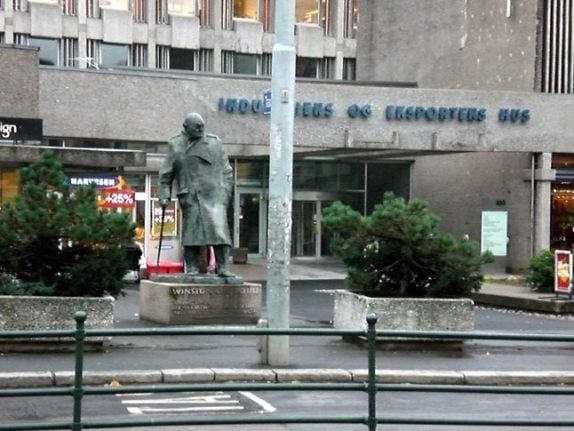 “The statue stands there as a thank you for giving us our freedom back, and was erected in connection with the hundreds of thousands of people coming out to hear Churchill speak,” Peter Frølich, a politician for the ruling Conservative party, told the Nettavisen newspaper.
“We honour him for helping to free Norway and Europe from the clutches of Nazism,” agreed his party colleague Stefan Heggelund.  “It is absurd to see this petition. You almost have to rub your eyes with disbelief. Of course he should have a statue in the centre of Oslo.”
By Thursday morning, 4,235 people had signed a petition calling for the statue to Winston Churchill in Oslo's central Solli Plass square to be removed.
“Winston Churchill was a racist and believed that the white race was superior,” Yasmin Zannachi, the petition's creator wrote.
“It is INCREDIBLE that racist white men who think it was okay to oppress black people… have a place in our streets!”
“We expect all the statues to be pulled down! Basically, they were both racists, and that should be a good enough argument for them not to stand in our streets in 2020. Anything positive these historic people have done is overshadowed by the fact that they were racists.”
As well as Churchill, Zannachi also called for a statue of Ludvig Holberg, seen as the founder of Norwegian literature, to be removed, arguing that he had invested in the slave trade.
Frølich said it was “absurd” to call Churchill racist, given his role reestablishing liberal democracy in Europe.