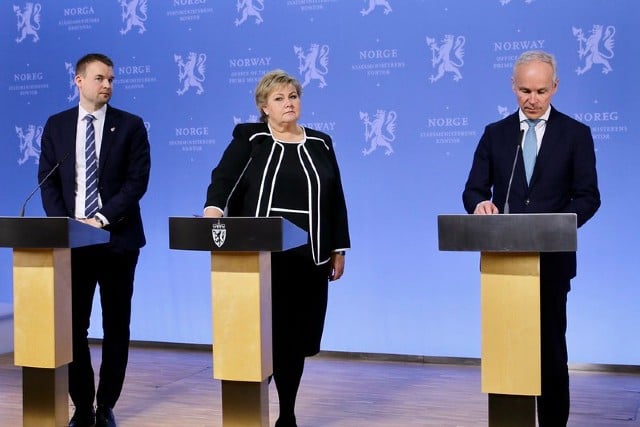 Prime Minister Erna Solberg and Finance Minister Jan Tore Sanner (right) announce financial support measures to aid companies and employees during the lockdown. Photo: Norway PM's office/Flickr
While a clear majority of respondents to our questionnaire felt the restrictions imposed in Norway were proportional to the threat of coronavirus, they were less enthusiastic about the government's implementation of them.
Paul, from the US, said that Norway seemed to have found the sweet spot between the less restrictive approach of neighbouring Sweden and the more dramatic lockdowns in the UK and Europe.
READ ALSO: Tell us how coronavirus has changed life in Norway
“Seems to be one of the best responses in the world. It's more than just the government We didn't overreact (in Oslo), and I think being calm does a lot for the stress levels,” he said.
People took a lot of self responsibility and did their best for the greater good.
Jakki, an Irish illustrator who has been living in Norway for 20 years, said that she had been impressed with the dygnad spirit.
“People took a lot of self responsibility and did their best for the greater good,” she said.
READ ALSO:
Jugal Verma, an Indian executive, said he had been impressed with the way government ministers had showed empathy and understanding.
“Supergood. I think they put a human face to the government when dealing with the crisis,” he said.
For him, the experience of living in Norway was witnessing the importance of trust in public authorities.
“The way the overall country has responded also reaffirms the value of 'trust' in society and also of the society towards the government,” he said.
“It is also very nice to know the PM interacted with kids in a formal way when she organised two to three press conferences where she could take questions from the kids and also address kids.”
Those that complained about Norway's response mostly said they had found the bureaucracy difficult to deal with, particularly when seeking benefits payments.
“It's reminded me that they are very strict, slow, and think they are incredibly important,” complained one Australian tour guide who complained that there had been no support for self-employed foreigners.
He said the authorities should be “quicker with payouts and take unique jobs more into consideration”.
“Not everyone takes a boring 9-5 contract job,” he said.
Luci Blatch, a bartender from the UK, said she had struggled with not working for nine weeks, but had at least got her job back when pubs reopened.
What most expats wanted from the government now seemed to be for the Norwegian Labour and Welfare Administration (NAV)
Public agency to speed up payments, or to provide payments to self-employed people, and for travel restrictions to be removed.
“More information about different options re travel to and from Ireland,” said  Moore. “I am resident in Norway, but my elderly parents live in Ireland.”
“They should implement special directives to ease the residency permit process, travel ban and restrictions for those who are to unify with their loved ones and family members,” said Naeem Sarmad.