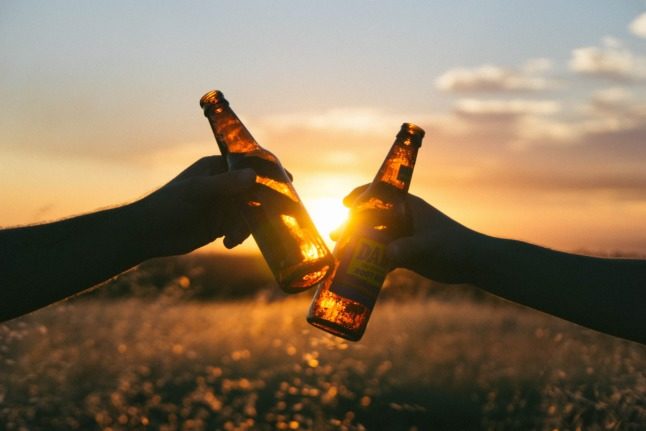 This Monday, it will be easier to knock down summer beers in Norway. Photo by Wil Stewart on Unsplash
In Norway many were expected to take advantage of the warm weather on Monday’s bank holiday to enjoy an “utepils” — a beer consumed outdoors.
Rules stipulated that groups must be limited to 20 people, with distances of one metre (three feet) between each person except for those living under the same roof.
Only table service is allowed, regular disinfection of tables and chairs is required, and establishments must close by 11:30 pm.
“Experience up until now shows that it is harder to maintain good epidemiological precautions with high alcohol consumption,” Oslo city official, Victoria Marie Evensen, said in a statement.
Bars that also serve food were authorised to reopen in early May.
Norway, which has confirmed 8,411 cases and 236 deaths from coronavirus, imposed strict measures to curb the spread of the virus on March 12.
Officials have said the epidemic is under control and began slowly lifting restrictions on April 20.
Meanwhile, in Finland, the 10,000 bars and restaurants, which were closed to indoor customers since April 4, were only allowed to admit half of their normal capacity under regulations that will stay in place until at least the end of October.
The move has been criticised by Finland’s hospitality trade union MARA, which said the customer limit would make businesses unprofitable while rent and utilities would be charged at full rates once premises reopen.
Outdoor terraces and gardens will have no customer limits, however, with the law telling punters not to get “too close” to each other without specifying a minimum distance.
Drinkers and diners must be seated at a table or bar while self-service food buffets, a much-loved staple of Finnish restaurant culture, are not allowed for hygiene reasons.
“This first step is still gentle, but very much needed. Now we need careful and controlled steps,” Social Services Minister Krista Kiuru said when announcing the reopening in May.
Finland, a country of 5.5 million, has reported 6,776 COVID-19 infections and 314 deaths.