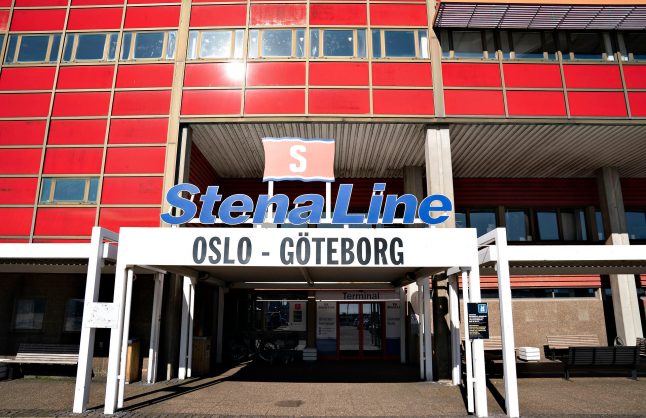 No departure? Ferries will from next month travel from Oslo to Denmark but not to Sweden. Photo: Henning Bagger/Ritzau Scanpix
While Denmark has also opened its border to tourists from Germany and Iceland, Norway is for now only opening its borders to tourists from Denmark.
The decision to push ahead without Sweden will come as a blow to Sweden's government which has in recent weeks put diplomatic pressure on its neighbours not to exclude it from a Nordic border deal, despite its higher rate of coronavirus infection.
“Danes and Swedes have family, lovers, and holiday homes across the borders,” Denmark's Prime Minister Mette Frederiksen said at a press conference announcing the deal at 2pm on Friday. “Denmark and Sweden are at different places in relation to the coronavirus [epidemic], and this has a bearing on what we can decide in relation to the border.”
With 430 deaths per million people, Sweden has a much higher death rate linked to the new coronavirus than that of neighbouring Nordic countries Norway (43 death per million), Denmark (98), Finland (56) and Iceland (29), which have all imposed much stricter measures aimed at curbing the spread of the disease.
The Danish government has released an English-language fact sheet explaining the deal, and the Norwegian government has issued a press release and published travel advice (in Norwegian) for those planning of travelling to Denmark.
Travellers from Norway, Germany and Iceland coming to Denmark will be asked to show proof that they have a booking at a hotel, holiday house or campsite for a minimum of six nights somewhere other than Copenhagen, and will be asked at random to take an optional coronavirus test.
“The ban on stays for tourists in Copenhagen is about keeping the intensity” of the virus spread down, Denmark's justice minister, Nick Haekkerup, said. “We must avoid a super spread.”
Norway is not imposing any similar restrictions on Danish tourists in Norway.
At the same time Denmark has changed its travel guidelines for those leaving the country to travel to Norway, Germany and Iceland so that the journey need not be absolutely necessary and they need not spend 14 days in quarantine on their return.
They must, however, stay in “non-urban areas with a population of less than 750,000”.
Solberg said that Norwegian authorities were in talks with Sweden, Finland and Iceland about including them in the same 'travel bubble', and said that the ultimate aim was to create a common regulatory framework for the Nordic countries.
“An agreement needs to be be reached between the infectious disease authorities on the criteria for identifying which regions have a high reproduction number,” she said. “Such areas should not be visited by tourists from other Nordic countries.”
But she told a reporter in Oslo for Sweden's TT newswire that she had struggled to reach a deal with Sweden.
“In the situation we're in right now, it is going to be hardest to find a solution for Sweden. But there are regions in Sweden with a low level of infection where we might be able to find a solution,” she said.
She said she had had two separate discussions with Sweden's prime minister Stefan Löfven over the issue, but that otherwise the negotiations had taken place between ministers of the two countries.
Sweden's state epidemiologist Anders Tegnell said that discussions continued between the Nordic countries.
“We are in a continual dialogue between the authorities. As recently as today, we have had contact with both Norway and Finland on this question,” he said at Swedish Public Health Agency's daily coronavirus press conference.
The Danish fact sheet says that the authorities were in talks with Sweden and Finland about including them in a similar deal before August 31.
“With regard to Sweden, the travel advice could be lifted regionally provided an adequate model can be found,” it reads.  “There will  be a special focus on the Øresund region.”
Frederiksen also said that Denmark was planning on opening up to tourists from other countries later this year.
“On the other side of summer we are expecting an opening for the other Schengen countries and the UK,” she said in the press conference.
Niels Paarup-Petersen, a member of parliament for the Swedish border city of Malmö, told The Local he was “disappointed” by the decision.
“I'd hoped that we wouldn't be treated differently. The numbers are a bit different on a national level, but I'd hoped they'd look more at a regional level.”
A 6km queue of Danes returning from Sweden after the long Ascension day weekend early this month fuelled Swedish resentment of the fact that while Danes can freely travel into Sweden, Swedes without a “worthy reason” are blocked from entering Denmark.
At the press conference, Frederiksen said the deal represented a milestone in Denmark's return to normality.
“We are a country that is used to accommodating a lot of tourists, we want to be an open country, even though the coronavirus has hit Denmark and the rest of the world,” she said.
Danes coming to Norway will be able to cross Sweden without needing to go into quarantine on their arrival, Solberg told reporters during the press conference.